9/04/2009
This comes from Cinema Blend. Interesting -- and I honestly can't wait to see what comes of this...could it be a sequel or remake? 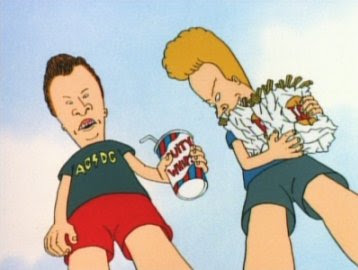 Mike Judge has made a cult classic comedy, Office Space, and had the animated series
King of the Hill running for 13 seasons. But even with his third feature Extract coming out this Friday, Judge is still, in many ways, the guy who created the two animated loser teenagers who defined the 90s.

When I talked to him today, the conversation turned to Beavis and Butthead almost by accident, talking about the promo video for Extract that features the iconic characters. He expanded on some of the comments he made at Comic Con about wanting to revisit Beavis and Butthead, saying he's been coming up with ideas for the characters all these years, and is definitely considering making a second movie. Bear in mind, that does not mean there will be a second movie, just that Judge would consider it. Still, if you've ever wondered what Beavis and Butthead would be like as tech support guys or as 60 year olds, well, Mike Judge has too.

Read about his plans for the characters, and how he compares them to Cheech and Chong, below. We'll have more from our interview with Judge tomorrow.

Was it a good feeling going back to that? I know at Comic Con when you mentioned revisiting Beavis and Butthead, everybody was talking about it.
I don't ever want to close the door on that, but it seems like a couple of times when I've done interviews and say I've thought about, I go on the internet and see a headline that says I'm starting on the sequel. If I did do another movie, I wouldn't think of it as a sequel, it's just another. I don't think of the Cheech and Chong movies as sequels. If they didn't take so long-- it would take at least two years, and I haven't had two years to spare in a while. It is fun to do again. I worry that as I get older my voice is going to change, so I don't sound the same. But it was fun doing this one.

Occasionally I'll get an idea. A while back, I was thinking, God it would be so fun to just have them working tech support. They're the guys you get when you call. I started writing stuff down. The guy who I co-wrote the first draft of Idiocracy with, Etan Cohen, the whole time we were working on that script, we kept getting distracted thinking of Beavis and Butthead stuff. He was buying a new car, going through that process, and they started writing something about them wandering on a lot and trying to buy a Mercedes.

You feel like you still have it in you to write these guys, even though you've gotten older?
Yeah, I was still pushing 30 to begin with. I have no excuse. But yeah, I feel like they're always still there. I keep wanting to do something with them being like old, in their 60s, two dirty old men sitting on a couch. I've got various drawings of them old, two of which became their dads in the movie. Yeah, I've thought about that.