'The Other Guys 2' A Possibility 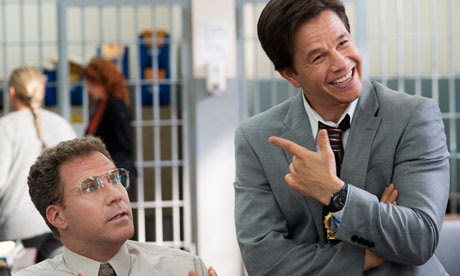 Adam McKay recently spoke to MTV about a possible The Other Guys 2. And here's how that went...

Though it was a much bigger success than “The A-Team”, same deal if anyone wants to see a sequel to “The Other Guys” : Buy the DVD… and hope that the film “ages well”.

That’s what director Adam McKay tells MTV Movies Blog today when asked whether or not we might see Will Ferrell and Mark Wahlberg’s ‘loser’ cops back on the beat one day.

“[A sequel] has been kicked around. You know, Will and I both feel the same: Box office is one thing for these comedies, but you really see that the best gauge is how they play on DVD and TV and downloads and all that. So you don’t really know until a year or year-and-a-half after it comes out. “Step Brothers” had a pretty decent box office run. I mean, it made money and did really well, but it was until like four months after it came out that it really started catching. “Anchorman” was the same way. You find the fan base like a year later. So if “Other Guys” ages well at all, we’d love to do a sequel. So we shall see.”

After a couple of not so successful comedies, such as the box office bomb ”Land Of The Lost”, Will Ferrell badly needed a hit, and thankfully he found it with ”The Other Guys”. Teaming up once again with writer/ director Adam McKay (”Anchorman”), this buddy cop action comedy is jam packed full of one-liners. McKay is the master of the awkward moment, and in this he nails the mix of smart and silly humour.

The odd couple relationship between Ferrell and Wahlberg is a major reason this film works, and it provides many of the funnier scenes. There are some big action sequences in here too; including what is probably the first car chase done with a Toyota Prius Hybrid car.

If you enjoyed Will Ferrell in ”Step Brothers” and ”Talladega Nights”, you will love him in ”The Other Guys”. A few days after watching it, I wanted to see it again, a good sign for a so-called “stupid” comedy.