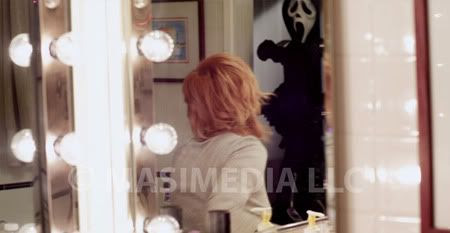 The documentary on the Scream franchise, Still Screaming: The Ultimate Scary Movie Retrospective, is in full swing and here we are treated to a great shot of the Ghostface killer in full attack mode from a "movie-within-a-movie" inside the doco (and no, it's not a Stab sequel).

Today Scream-Trilogy reveals an exclusive first look at the ‘fictional’ linking segment from Still Screaming: The Ultimate Scary Movie Retrospective. Taking Scream to the next level of meta, Ghostface intrudes on a young woman’s dressing room in our world.

The doco’s director Ryan Turek told Scream-Trilogy “we just wrapped shooting something unique to the retrospective and stays true to Scream’s self aware attitude. It’s something I wrote and directed. It’s not a Stab fan film, but a mini-narrative set in the real world where the Scream films exist for our two characters.”

Turek has previously revealed that this special sequence will also make reference to the slew of genre documentaries that have been hitting the market. Still Screaming’s production company Masimedia has masterminded or contributed to Halloween: 25 Years Of Terror, His Name Was Jason: 30 Years Of Friday The 13th, the recently released rave-reviewed The Psycho Legacy, and the upcoming Unearthed: The Hellraiser Saga.