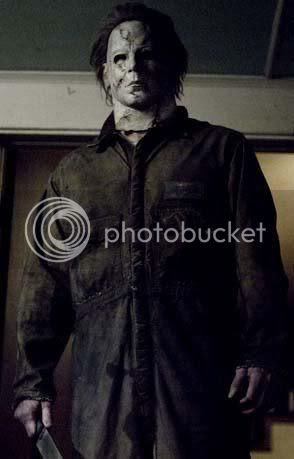 Here's the skinny on the latest Halloween installment, set to be filmed in 3D. This comes from Deadline Hollywood...

EXCLUSIVE: So here's what happened: the script only came in Friday, the first draft that Dimension Films had seen. And The Weinstein Co was rushing to get the film into production for a November start date because it has to be done by January when director Patrick Lussier starts a film for Avi Lerner. A release for Summer 2010 was planned. Sure, the rumor mill claims TWC is out of money amid all those layoffs, and TWC couldn't agree on a $2.5M budget battle with Lussier, and TWC had key crew ready to fly to Shreveport. But I understand that Bob Weinstein shut down H3D pre-production "because Bob just felt it was rushing too fast." Now Dimension plans to start the film after My Bloody Valentine 3D helmer Lussier is free. (After all, the film editor got his directing start making Dracula 2000 for the Weinsteins.) But I know what you're thinking: Rob Zombie's reboot sequel Halloween II did lousy at the box office so perhaps TWC wants to cut its losses. "We make those pics for very little money and tight marketing dollars so anything north of $25M is a huge success for us," an insider tells me. Meanwhile, HII, whose domestic total is now $32M, will get a re-release on Halloween in selected theaters for midnight showings.