Is Point Break 2 dead in the water? 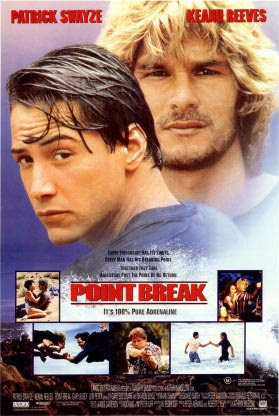 This may come as a surprise to some, but to the majority of fans who have been following the news on Point Break: Indo closely, this is a no-brainer. It appears that the long gestated sequel may officially be dead in the water (pun intended).

This comes from Moviehole:

I've been following a story throughout most of the day.... and it may just have come to an unexpected (or was it?) conclusion:

11:56 am : OK, wanna know what's going on with "Point Break Indo"? Nothing. It's dead. Two as-good-as-official sources have just confirmed for me that the film has fallen over. It may get back up later, but at this stage it's not happening and the attached cast have been freed up to work on other projects. Had a feeling this might have been the case.

10:50am : One person I did chat to about the film this morning was Lori Petty, who you'll recall played Tyler in the 1991 classic. She knows nothing much about "Point Break Indo", only that she'd like to be in it - and quite frankly, can't understand why she hasn't been asked back to cameo.

Petty, agreeing that the original is now a cult classic, thinks its "ridiculous" that they'd do a sequel without any link to the original Kathryn Bigelow film.

"How can do they do a sequel and not put me, Keanu [Reeves] or Patrick [Swayze] in it?", says the actress. "I mean, even a cameo - like a Where's Waldo kind of thing... [we could be] in the background somewhere. It would've sold like ten million dollars more tickets!"

So, in other words - RGM, Wadlow... Lori Petty wants in on the "Point Break" sequel. She may even be prepared to get her feet wet again for it.

10:25am : I don't know what's going on with the "Point Break" sequel. It's been All Quiet on the Western Front with that one for months now. I've tried to contact RGM in Singapore to get an update - but can't get a response. Also tried touching base with director Jeff Wadlow (who replaced Jan de Bont) - but his ISP seems to be down too. All I can gather is that the film has been pushed back a few months - or put on hold permanently, since it was originally supposed to lens a couple of months back.

The last we heard was Damien Walshe-Howling ("Underbelly") had snagged the role of the villain, and that Rick Otto was playing one of the good guys - if not the good guy, undercover agent Billy Dalton. Some of the supporting roles were also being filled. And filming locations had been chosen in Indonesia, but mostly Australia.

I have no clue as to what to think...