Sheen back for Wall Street 2 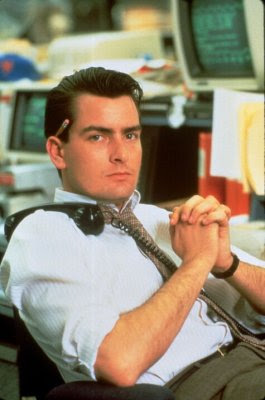 Charlie Sheen is returning to reprise his role in upcoming sequel to Wall Street, a film about the consequences of insider trading (sounds boring, but the film is very interesting). Here's what Moviehole had to say...

Speaking to The New York Times about his upcoming “Wall Street” sequel, director Oliver Stone confirms that Charlie Sheen will be back to play Bud Fox in the flick – if even fleetingly.

Sheen will apparently make a cameo appearance in the sequel – set to lens this week in New York – reprising his role from the 1987 hit.

In the original, Bud (Sheen, then hot off Stone’s “Platoon”) was a determined young stockbroker at Jackson-Steinem. His hero is the extremely successful but unprincipled corporate marauder Gordon Gekko (Michael Douglas), a callous and legendary Wall Street player whose values could not clash more with those of Bud's father Carl (Martin Sheen). In an effort to win Gekko as a client, Bud visits with the raider on his birthday and pitches him stocks which Bud had been analysing for some time. And thus the relationship starts…. And Bud’s downfall begins.

At the end of the film, Bud – whose dodgy dealings with Gecko have caught up with him - wears a wire for the FBI, managing to get Gecko to mention on tape some of his illegal business activities. He turns the wire tapes over to the federal authorities, who suggest that his sentence will be lightened in exchange for his help with the federal investigation into Gekko. The film ends with Bud arriving at the courthouse.

Can only assume Bud Fox will be back on the floor in the sequel – having now been punished for his wrongdoings in the 80s.

It seems Josh Brolin is also now a lock for the film. Said to have been in talks for the past month, Stone has confirmed the “No Country for Old Men” star is onboard to play an evil investment banker in the film.

Others making small appearances in the film include Nouriel Roubini, a New York University economics professor and chairman of a consulting firm, and Jim Cramer, the hyperkinetic host of “Mad Money” on CNBC.

A lot of the action in the film, Stone tells the newspaper, will take place at the Federal Reserve Building.

The stock exchange, whose hectic trading floor was a frequent image in the first film, will be less prominent.

“In the original ’87 movie there was no Federal Reserve, we didn’t get into that,” Stone said. “But now the world has changed radically. This is part of the bulwark of the system.”

And when we’re reintroduced to Michael Douglas’s Gordon Gecko again he’s “out of prison in the beginning of this movie, he essentially has to redefine himself, redefine his character,” Stone said. “He’s looking for that second chance.”