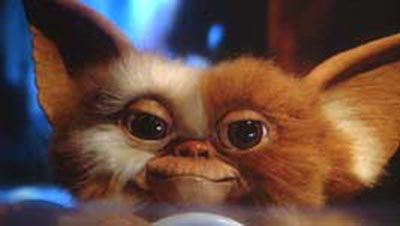 Does every movie with a "3" in the title have to be 3D nowadays? Ugh. This saddening news comes from MarketSaw...

Jim here. Speaking of combining horror with comedy (GHOSTBUSTERS 3D), up comes another prime example of that genre - GREMLINS. Again I have very good information from a top source that tells me another GREMLINS movie is coming to the silver screens and it will be in stereoscopic 3D! It is in the early stages with still lots of hurdles to pass, but it is being developed. This is not a 3D conversion of the original to be clear.

Seems like a good idea to me - especially in light of the GHOSTBUSTERS news we broke on Wednesday. The original GREMLINS was directed by THE HOLE's Joe Dante, with executive producer STEVEN SPIELBERG and writer CHRIS COLUMBUS.

The story centered around a pet purchased at a curious shop in NYC's Chinatown which had some quirks, namely rapid reproduction when introduced to water (one new creature per drop of water) and turning into gremlins after midnight if they feed.

From what I have been hearing, THE HOLE has been getting good critical reviews and it is so nice to have Joe Dante back behind the camera! It would make sense to bring him back for the S3D version of GREMLINS but I have not heard any more details. When I get more you will be the first to know :-) Looks like edgy family fun is on it's way back with GREMLINS and GHOSTBUSTERS, both in S3D of course!

Special thanks to my sources who keep us all in the loop!! You know who you are.