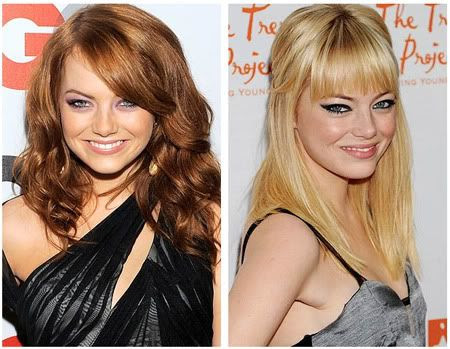 This all comes from omg! on Yahoo!...

"Zombieland" actress Emma Stone has switched up her signature fiery red look in favor of a brand new blonde hairdo, which she debuted on the red carpet at the Trevor Live benefit in West Hollywood on Sunday.

Though Stone is in fact a natural blonde, the actress has made her name sporting red or brunette locks in movies like "Easy A" and "Superbad." Why the move to the dark side in the first place?

"When I first moved to L.A., I had this agent who thought, because I was blonde, that I only wanted to play cheerleaders," Stone told Britain's The Independent. "So she'd send me out for all these parts where they thought: 'What a weird 15-year-old. It's not going to work out!' I don't know if anyone necessarily underestimated me as a blonde -- I think I just had a crappy agent. So one day, in a fit of trying to do something different, I just dyed my hair dark brown and got my first role a week later, after which I thought: 'People are close-minded, man! Like a different hair color changes everything!'"

Ditching her signature red tresses wasn't just a whim on the part of Stone. She underwent the change in the name of art to play Gwen Stacy in the upcoming "Spider-Man" reboot -- a role that required her to possess lighter locks.

Thanks to omg! on Yahoo!