12/11/2010
Below are some pictures and information regarding the abandoned 1997 Superman Lives that Tim Burton was set to direct. Photos were made available by Steve Johnson, an FX artist... 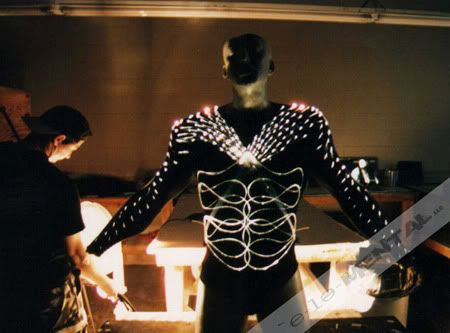 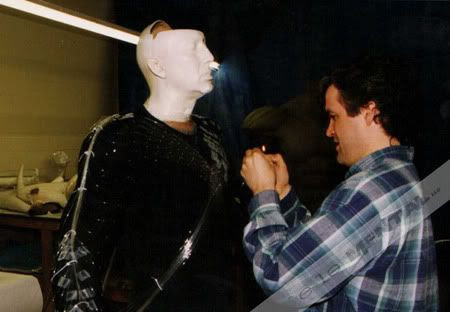 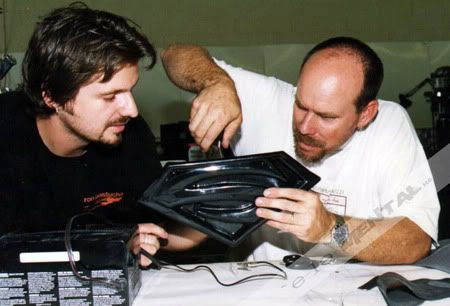 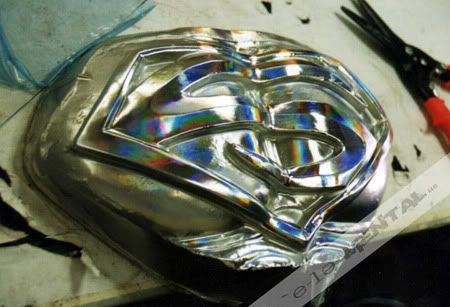 Feels like yesterday we were posting news items about “Superman Lives”, the failed Tim Burton take on the legendary character. In fact, I remember exactly where I was when I updated the site with news that the film had fallen through. Also remember the image we used. Funny how some things stay with you like that.

You all know about “Superman Lives” right? Before McG, before Brett Ratner, and way before Bryan Singer, Tim Burton had been charged with the task of bringing Superman back to theaters. Nicolas Cage (I know, I know…) had been hired to play The Man of Steel.

Here’s a bit of a refresher (remember all this stuff so well because we seemed to be reporting on it each and every week) :

I was in the university ‘computer room’ – where students would fight over this new thing called ‘the internet’ – when the film was announced. Jaw dropped when I read that Burton would be doing it, fist hit the desk when I read Nicolas Cage would be Kal-El. I was also a little confused why Kevin Smith, who at that point was known only for “Clerks” and “Mallrats”, had been tapped to write the screenplay…. of a superhero movie!?

As it would turn out, Cage, Burton and Smith weren’t the ones we needed to be worried about. Jon Peters, who had had a hit with “Batman” (1989), thus hiring Burton for “Superman Lives”, had no idea how to make a “Superman” movie. He wanted Superman to wear an ‘All-Black suit’ and, oh get this, Superman wouldn’t fly in the movie! Peters only had one other requirement : Smith’s script need incorporate a giant spider in the third act (he recycled this idea for the “Wild Wild West” movie).

The film’s villains would’ve been Brainiac (who in one scene is fighting polar bears at the Fortress of Solitude) and Lex Luthor… and his dog (Peters wanted to sell heaps of toys).

Smith, of course, tried to persuade Peters into hiring ‘his’ “Superman” cast for the movie – Ben Affleck as Superman, Linda Fiorentino as Lois Lane, and Jason Mewes as Jimmy Olsen. Peters didn’t go for that. They did agree on one casting decision though and that was Jack Nicholson – again, a port-over from Peters’ “Batman” – as Lex Luthor.

Cage was ultimately cast as Superman because, in Peters words, he could “convince audiences he [Superman] came from outer space.” Tim Allen and Jim Carrey were sought for the role of Brainiac, Courteney Cox was in talks for Lois Lane, and Chris Rock had been cast as Jimmy Olsen. Michael Keaton had also gotten a call, and asked whether he’d be free to come by and cameo as Bruce Wayne.

“Superman Lives” entered pre-production in 1997, at which time Wesley Strick (“Cape Fear”) had been hired to totally rewrite Smith’s script.
“The studio was happy with what I was doing. Then Tim Burton got involved, and when he signed his pay-or-play deal, he turned around and said he wanted to do his version of Superman. So who is Warner Bros. going back to? The guy who made Clerks, or the guy who made them half a billion dollars on Batman?”, said Smith.

With the film in pre-production in Pittsburgh, Dan Gilroy had been hired to rewrite ‘Strick’s script’, and the Warner Brass were demanding Burton shred $90 million off the film’s $190 million dollar budget. Burton ultimately walked (went and did “Sleepy Hollow”).

Thanks to Moviehole for the info!