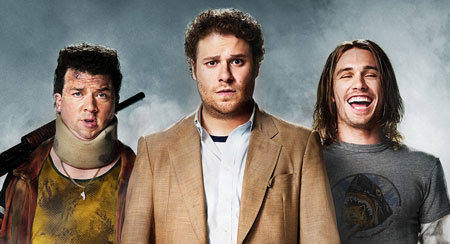 Screenwriter Evan Goldberg has been doing a lot of thinking lately on a possible Pineapple Express 2...

“Pineapple Express” scribe Evan Goldberg says he’s warming up to the idea of doing a sequel to his 2008 stoner comedy. “I’m even hesitant to make Pineapple 2, but I’m loosening up to it as of like the last few weeks. Recently we were at Danny Mcbride’s wedding, and we were all there, well David couldn’t make it (David Gordon Green, the director of Pineapple Express); but me, (James) Franco, Seth and Danny were all there and I thought; ‘this is fun, I have fun with these guys.’ … Everyone has always wanted to do it, me and Seth were very hesitant, but frankly I was the driving force behind that hesitancy. I just kept thinking, you know not to say we’re the Coen Brothers, because we’re super not – they’re my idols in a lot of ways – but those guys never make a sequel. Like, great, great films don’t have sequels. … hopefully, there will be a sequel.” (Source : Screen Rant)

Thanks to Moviehole for the excerpt.