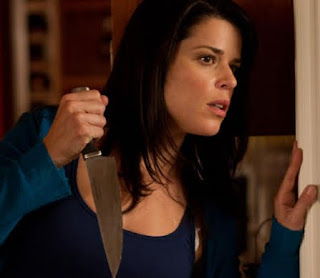 Beware of Twitter and IMDB, Scream fans. Spoilers for Scream 4 are bound to be pouring in any minute, as the film was officially test screened in Pittsburg, Pennsylvania tonight at 8PM. False spoilers have already begun to spread like wildfire by people with too much time on their hands, and a few of the tweeps on Twitter who claimed to have attended the screening have hinted they might leak information. Doing so, though, would result in possible lawsuits as everyone who attended the screening had to sign a contract promising not to talk about the film in any format.

It's unclear why Dimension Films would preview the film so early to the general public, considering it won't officially be released until April 15th, 2011. If you're like me - totally spoilerphobic - then it would be wise to avoid fansites and the Scream 4 IMDB page now until the film is released. It's going to be quite a task for some fans, who have already had a hard time keeping themselves from being spoiled, with pictures leaking, audition scripts, and reports from movie extras. I'll personally hire a Ghostface to track down anyone who spoils me or my friends.