'Dumb & Dumber' Sequel In The Works! 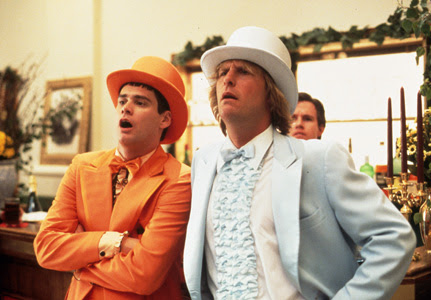 Finally! A real sequel to Dumb & Dumber -- and I'm not talking about that other film (Dumb & Dumberer). It seems a legit sequel is in the cards that looks to reunite Jim Carrey and Jeff Daniels as Harry and Lloyd. Hmm...maybe this means Carrey would be keen to a reprising The Mask somewhere down the line; one can only hope.

Speaking to Bob Farrelly at the “Hall Pass” junket in Sydney this morning, the filmmaker – one half of the veteran comedy duo known for their ridiculously over-the-top laffers, “There’s Something About Mary” and “Kingpin” – let slip that he and his brother Peter are currently developing their first sequel.

“[Dumb and Dumber] has run a bunch of times on TV in the states, and kids will come up and they’ll be able to quote lines from that – lines that I’ve long forgotten. If we could get those two guys back together, Jim Carrey and Jeff Daniels that might be a worthwhile sequel – and that ball is in motion. We’re starting to think about what those two dimwits would be doing twenty-years later in life, and hopefully we’ll be able to come up with something worthy of a sequel.”

The 1994 original (which I still remember seeing in the country cinema on first day; so, so silly but oh so funny) spawned a poorly-received prequel, “Dumb and Dumberer : When Harry Met Lloyd” which saw Eric Christian Olsen and Derek Richardson play the roles made famous by Carrey and Daniels. A sequel with the original duo? Please!

Though they’ve yet to cast their bumbling trio, Farrelly is happy to confirm rumours that Australian actor Shane Jacobson (“Kenny”) is indeed in the mix to play Curly.

“Shane came highly recommended to us and we are taking a look at him. We haven’t cast it yet, but he’s definitely in the mix.”

Also likely to star in the movie, though not as one of the Stooges, is Farrelly’s regular Richard Jenkins.

“As we were starting [The Three Stooges], my first question was ‘Where we gonna put Richard?’”, laughs Farrelly, who has used Jenkins in most of his past films, including current hit “Hall Pass”. “We do have a spot in mind for him… but a lot of it has to do with whether the guy’s available and that sort of thing. I hope he is.”

Farrelly says “Stooges” will be unlike any film they’ve done before.
“We’ll probably be a lot less typically Farrelly brothers stuff, we’re going to be as true as we can to the spirit of The Three Stooges – they weren’t raunchy or outrageous, they were more about the slapstick, almost vaudeville-type humour. It’ll probably be less us, more of them.”