How 'Prometheus' Is Connected To 'Alien' 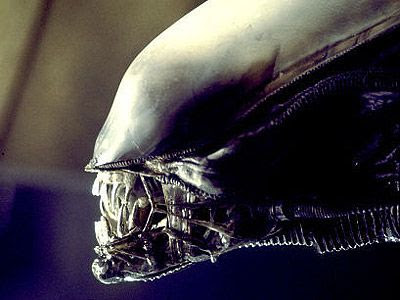 So Ridley Scott's next film was originally supposed to be a prequel to Alien, but as pre-production evolved, the film sort of took its own identity, being retitled Prometheus and even garnering some cast members and vague plot details. However, the film and still be set in the Alien universe and may, in fact, be a prequel...

Is there anyone in Hollywood who can tell me what the f*ck is going on with Ridley Scott’s next film?

So, remember when Ridley Scott was going to make an “Alien” Prequel? And then in January, an interview with Scott referred to the film as having evolved into its own “grand mythology and universe,” and had been renamed “Prometheus”. It was then announced that Noomi Rapace (The Girl with the Dragon Tattoo) would be starring as one of five main characters in the film.

Scott acknowledged that “Prometheus” still had strong roots in the “Alien”, noting it as being a ‘jumping-off point’, leaving the film’s function as a story set in the Alien universe or an entirely stand-alone film ambiguous. Shortly thereafter, it was reported that Charlize Theron and Michael Fassbender were cast in the film.

Fassbender stated the film was still an “Alien” prequel, saying, “Prometheus is absolutely connected to Alien… There’s a definite connecting vein.” A recent article from Bleeding Cool sheds some light on Fassbender’s statements. “It has the Alien aliens in it. The catch, though, is that you might not recognize them – at least, not at first.”

Having read the original prequel script, by Jon Spaihts, I can tell you that the Aliens were certainly different – as they had been engineered by the Space Jockey species (called Engineers) and had not been exposed to human DNA yet.

Bleeding Cool’s Brendon Connelly goes on to point out that the setting of “Prometheus” would be a planet that has been terraformed to create the perfect environment in which a particular bio-weapon could be created under the right conditions.

In Spaihts’ script, the Engineers use the xenomorph creatures to terraform planets, creating huge ant-like hives and hills throughout the landscape. This terraformed planet will no doubt be LV-426, the setting of “Alien” and “Aliens”.

It’s also rumored that the Space Jockey glimpsed briefly in “Alien” will play a pivotal role in Scott’s new film and now it seems that the creature will indeed be appearing in “Prometheus” after all. An insider for Sky Movies says that the Jockey will be brought to life as an eight foot tall animatronic puppet, with sculptor/set designer H.R. Giger overseeing its design.

I’m dying to read Damon Lindelof’s draft of the “Alien” prequel script – even if it is unrelated to the finished product of “Prometheus” – though it seems that “Prometheus” not only takes place in the “Alien” universe, but clearly connects to the series as a prequel – showing the origins of the xenomorph species.

It’s rather confusing to me for a director to state he’s going to make a prequel to a film and then announce that this isn’t an “Alien” film, but rather a new science fiction property that has elements of “Alien”, only the elements are literal bits and pieces of the original film. So which is it? Suffering the stigma of making a prequel or making an original film that contains numerous elements of a previous concept?

Brendon also mentioned that his source said the title “Prometheus” was being used for a reason. We know Prometheus stole fire from Mount Olympus and gave it to mortals. In a way, Prometheus gave humans the powers of a God. I would imagine the title refers to the ability to create life, more specifically human interest in wielding the Engineer’s knowledge of terraforming and creating the xenomorph species.

In any case, I’m intrigued. I want to know everything there is to know about this film – and most importantly – how much of the original Jon Spaihts remains, because it honestly didn’t feel like an Alien film, whereas I’m under the impression Lindelof’s script introduced Space Marines and other familiar elements into the story.

At this point, I’m willing to pay someone fifty bucks to sit down and explain to me what the Hell is going on with this movie – Hell, I’ll buy you dinner! I’ll be at SxSW, so if you’ve got any information about this movie, hit me up – let’s get some Tex Mex and talk. I can keep a secret – it will be completely confidential – even if Clint tries to waterboard me…

By the way, this offer TOTALLY includes Ridley Scott – not that he really needs my fifty bucks or a free meal but, seriously, this is the first time I’ve been genuinely excited about a Ridley Scott film since…well… “Alien”.