OMG! Darren Aronofsky Out Of 'The Wolverine' 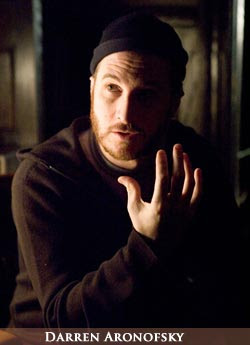 This just keeps getting better and better -- not really. Darren Aronofsky has bowed out of directing The Wolverine, a sequel to X-Men Origins: Wolverine. This sucks. I thought Aronofsky would have brought the clawed mutant to the big screen the way he was meant to be. This doesn't necessarily mean another director can't, I was just looking forward to Darren's vision...as were a lot of other fans, too.

Darren Aronofsky is bowing out of directing 20th Century Fox’s sequel The Wolverine, saying the project would keep him out of the country for too long.

Fox and Hugh Jackman - who is set to return in the title role - said they remain fully committed to making Wolverine and will move aggressively to find a new director.

Fox hadn’t yet greenlit the sequel. A significant portion of the movie will be shot overseas (there had been plans to shoot in Japan).

"As I talked more about the film with my collaborators at Fox, who have been totally supportive throughout my work on the movie, it became clear that the production of The Wolverine would keep me out of the country for almost a year,” Aronofsky said in a joint statement with Fox.

“I was not comfortable being away from my family for that length of time. I am sad that I won't be able to see the project through, as it is a terrific script and I was very much looking forward to working with my friend, Hugh Jackman, again,” he continued.

Stated Fox: “While we are of course disappointed that Darren can’t do The Wolverine, we also understand and respect his reasons. Having done both The Wrestler and Black Swan with Darren, we know he is an extraordinary talent and we look forward to working with him on other projects in the future. Hugh Jackman and Fox both remain fully committed to making The Wolverine. We will regroup and move forward aggressively.”

Christopher McQuarrie is writing Wolverine. Movie doesn’t have a release date yet.

Thanks to The Hollywood Reporter for the scoop.