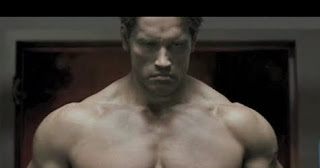 The more I read about Justin Lin and his ideas for the next Terminator flick, the more on board I am with this project. Looks like this is headed in the right direction...

A few days back it was reported that “Fast Five” director Justin Lin had officially attached Arnold Schwarzenegger to the “Terminator” project the former is shopping around town. It’s anyone’s guess when Lin’s “Terminator” will happen (or if it’ll happen; remember, it’s still without a studio and either party could easily change their mind) but it’s exciting to think of Schwarzenegger back in his trademark role and more so, someone seemingly capable and determined to deliver something solid charged with the task of directing the latest film. While there are still no details on the storyline (only rumours and speculation), Lin has divulged more details on how the project came about.

Lin, who helmed the last three “Fast and Furious” films and is apparently a big “Terminator” fan, talked to French website Cinetaste (via Collider) and recalled how he came to be invited onto the project.

“It’s actually Pacificor that approached me,” explained Lin. “They had an idea…but I guess a lot of studios didn’t go for it or something happened… So then, they came back to me and they said, ‘D’you have an idea?’ and, I said ‘I have THE idea!’”

Schwarzenegger then agreed to do the film and Lin was given the go-ahead to start shopping the project around.

Lin says his “Terminator” film won’t be all stunts and dazzle, either.

“Technology has grown so much that there’s a whole idea of gluttony. Sometimes you get carried away because you can have a camera go through the window, but do I need a camera go through the window? Those choices are up to the director,” claimed Lin. “For Terminator, it’s still very early on, but I don’t want to make a movie where it’s not just showing off. I want to support the human elements. If you don’t have humanity, then it just becomes robots.”

Thanks to Moviehole for the story.