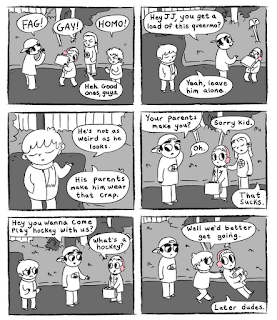 Jay Fuller is the creator of the Boy in the Pink Earmuffs a webcomic which was exhibited at this years C2E2 and Chicago Alternative Comics Expo. It centers on two young boys and their relationship as friends. In a way only comics can address it tackles heavy issues like childhood bullying, family acceptance, and young love while maintaining a charming and engaging art style. Jay was kind enough to give us some of his time via email to talk about his comic and issues of bullying. October is national bullying awareness month. We support the goal of making a world safer for nerd kind.


Can you start by introducing yourself to our readers? Are you in fact
a super sleuth posing as a web comic artist? Who is James Fuller?

I am a Super Sleuth! Or at least, I was. Back when I was about the same age as JJ and Danny, my friend and I called ourselves "Super Solvers," which came from an old series of edu-tainment computer games that we both used to play. We took the game into the real world and pretended to solve crimes around the neighborhood. That usually amounted to us looking at rocks with magnifying glasses, swapping the latest spy toys that our parents bought us, and talking to each other over walkie-talkie. I've gone by Jay for as long as I can remember.

I am based here in Indy so I'm curious to see if your stint
as a Hoosier affects your writing at all?

I've met a lot of lovely people in the Hoosier state, but I spent my formative years growing up in Rhode Island so it's the place that still feels most like home. I set the Boy in Pink Earmuffs in Rhode Island because that's where those stories and experiences come from.  But I think there's also an element of wish fulfillment. When I moved to Indiana, I was just figuring out my sexuality, only just falling in love, and I'll always wonder what might have happened had we stayed in the Ocean state. 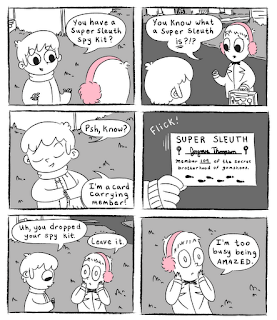 You just published your first B.I.P.E. comic. It was set in the future
and was a standalone story have you approached any publishers yet about
more comic adaptations and would they be in a similar format?

I haven't approached any publishers, no, but at this point BiPE is still just a labor of love. It's totally self-published and will probably remain a sort of slow-going side project until I can find a way to devote more time to it that makes financial sense.

There doesn't seem to be a great deal of content with glbt characters
geared towards children or young adults. Have you had responses from
younger readers because your protagonists are in their age range?

That's one of the reasons I started BiPE. There's not a lot of material that covers this part of life for young queer kids. People focus too much on sexuality and act as if we become gay once we hit puberty, but there was plenty of "queerness" going on in my life in that twilight period before sexuality hit. Back then, I wanted to hold hands with boysand give them valentine's and it wasn't about sex. It was a Charlie Brown kind of romance and I would have loved to have seen those desires reflected in books or comics or tv.

Most of my fans seem to be high school or college age, so I haven't heard too much from very young fans, although a young 12 or 13 year old girl once ran up to my table at a convention and told me she thought it was great what I was doing. OH MY GOSH did she melt my heart.

How much of your webcomic is drawn from your own experiences? I have to ask
do you own a pair of pink ear muffs?

I do own a pair of pink earmuffs, but --full disclosure-- I have to admit, I got them recently after I had already launched the webcomic. That said, the comic does draw a lot from my early childhood experience. Friends of family might recognize that the backgrounds I'm drawing are actually of our old neighborhood in Rhode Island. Also, the relationship between Danny and JJ is an amalgamation of two close friendships I had at about that time. I've taken huge liberties and the story is fiction above all else, but there's no way to separate out my own experiences from coloring the narrative and reflecting actual events in my life.

Did you have any stories or comics like B.I.P.E. growing up that
influenced your work?

One of the main inspirations for the style of BiPE was the kitschy Precious Moments art you might find in a bad Hallmark card or your Grandma's house. I always wanted to make a queer version of that junk. But Manga and anime also influence the style rather obviously and Peanuts is a HUGE inspiration as well. I always Identified with Linus and Shcroeder. As a young kid, I was convinced Shroeder's complete disinterest in Lucy meant he was just like me when it came to ladies. ;-)

Are there any new projects we should look forward to from you?

I'd like to have another minicomic like "Miss Priss is Missing!" complete early next year, but as of right now the only thing I have on my schedule is the painfully slow trickle (I'm sorry!) of new comics from the main storyline on my website. Keep checking back! I hope to switch to a more streamlined style like the line style I used for Miss Priss once I finish the current storyline arc in 3 or so more comics so stay tuned!

What message would you want to extend in your work about bullying or the difficulty children like J.J. and Danny experience being accepted and finding friends? What role does media play in alleviating some of those pressures or in generating characters like those in B.I.P.E. that they can relate to?

If you're a young lgbt kid facing bullying right now just because of who you are, I want to you to know it gets better, and it can get better right now. There are so many amazing resources. Seek them out! Stay strong. You are not alone and you don't have to wait until you're an adult to be happy. I suppose those are probably the two most important lessons you can get out of my writing.

----------
The above interview was conducted by Gabe Canada of Kind of Epic Show.