Jamie Foxx To Play Electro In 'The Amazing Spider-Man 2' 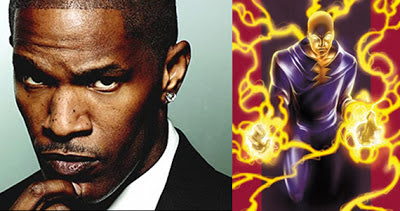 
Sony's "The Amazing Spider-Man 2" seems to be coming together faster than expected, as sources tell Variety the studio is in early talks with Jamie Foxx to play the villain in the movie.
Sources also told Variety that Foxx would play Electro, and Foxx later tweeted, "Dressed up as Electro for Halloween last night. Costume fits well."
Electro is the alter ego of Max Dillon, an enemy of Spider-Man who gains the ability to control electricity after being struck by lightning. Created by Stan Lee and Steve Ditko, the character first appeared in "The Amazing Spider-Man #9" in February 1964.
In "The Amazing Spider-Man's" post-credit sequence, set inside Dr. Curt Connors' cell at an asylum, the Lizard is approached by a mysterious, shadowy figure (Michael Massee) who asks if Peter Parker knows the truth about his father. Lightning features prominently in the scene, prompting auds to speculate that Electro would be featured in the sequel.
Andrew Garfield and Emma Stone are onboard to return, with Shailene Woodley in talks to join the cast as well. Marc Webb is set to return to direct.
Avi Arad and Matt Tolmach are producing the sequel, whose screenplay will be credited to frequent tentpole scribes Alex Kurtzman and Roberto Orci, as well as Jeff Pinkner, based on a previous draft by James Vanderbilt. "The Amazing Spider-Man" grossed $751 million worldwide, and the sequel is skedded to swing into theaters in 3D on May 2, 2014.