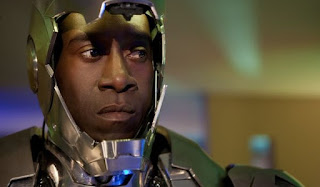 Don Cheadle just seems like a nice guy.  So nice, in fact, he was kind enough to sit with the good people over at Collider and answer a few questions regarding the upcoming Iron Man 3.


Expectations on Iron Man 3 are going to be sky high. What are your hopes for it?

CHEADLE: I hope that it performs to those levels. We did a little piece of it at Comic-Con and people went crazy. It looked great. The script is good. We’re doing a couple re-shoots next week, but I’m encouraged.

Are you doing the re-shoots here in town?

CHEADLE: I don’t think it matters to them. They still want me to drive them places and go get food and take them to movies. It doesn’t really matter. They haven’t asked me to fly them there yet.

What was it like working with Shane Black on Iron Man 3?

CHEADLE: It was good. We had a good time. It’s a really good cast. It’s a very interesting script. It was a lot of fun.

What did you think of the red, white and blue armor?

CHEADLE: Oh, I’ll let you react to that when you see it.

How will your character shake things up in Iron Man 3?

CHEADLE: I’m not supposed to say that he kills Robert Downey Jr.’s character. Is that a spoiler? That would be a spoiler. You knew that was coming. You read the comic books. No. I will just say that the buddy relationship that these guys have gets tighter. The third act set piece for the big finale is bigger and badder. It’s just a lot more.