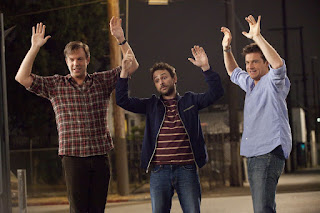 The deals are done.  Bateman, Day and Sudeikis are returning for Horrible Bosses 2.  Jamie Foxx is also expecting to return as the murder mentor Motherf***er Jones.


After more than half a year of negotiations, New Line has closed deals to reunite Jason Bateman, Charlie Day and Jason Sudeikis for a sequel to Horrible Bosses, the surprise hit comedy released in 2011.

Jamie Foxx is also likely to return and is negotiations to reprise his role as murder consultant Motherf---er Jones for the pic, which will see Seth Gordon back in the director's chair.