'Ninja Turtles' Filming At A Ski Resort In New York 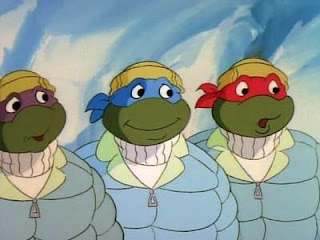 At least it is being filmed in New York, right?  Albeit, New York City would be ideal -- but a ski resort in Tupper Lake, NY?  Apparently, the Teenage Mutant Ninja Turtles live-action reboot, from Michael Bay, will be partly filmed at a ski resort -- really?

This sounds ludicrous, if you ask me.  Not saying it's a false rumor...just isn't "right".


The Adirondack Daily Enterprise reports that the filmmakers producing next year's "Ninja Turtles" movie will find out when they film some scenes at the closed Big Tupper Ski Area in Tupper Lake.

Paramount Pictures is remaking the popular 1980s Teenage Mutant Ninja Turtles. It is tentatively scheduled for release in 2014.

Village Mayor Paul Maroun says the movie company needed a closed ski resort and Big Tupper fit the bill. The ski mountain in the heart of the Adirondack Mountains has been closed because of financial problems.

Up to 80 people are expected to work on the shoot, which begins next week.