Kind Of Epic Show: Husbands: A Series Five Minutes Ahead Of History

5/06/2013
Article first published as Husbands: A Series Five Minutes Ahead of History on Blog Critics. 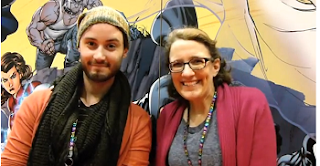 At this years C2E2 conference in Chicago I had the pleasure of speaking to Jane Espenson and Brad Bell. I asked them when their marriage equality comedyHusbands is set. Jane’s answer was telling: “It lives in an alternative reality. A reality where marriage equality has happened nationally and where there is an out professional baseball player. A world set about five minutes before things are happening in the real world.”

It turned out that it did not take much longer than those five minutes for those worlds to feel a lot closer. Less than a day after I spoke with Jane and Brad, NBA center Jason Collins changed the sports world with a few sentences: “I am a 34 year old NBA Center. I’m black. And I’m gay.” A few days after that Rhode Island became the 10th state in America to make marriage equality a reality. 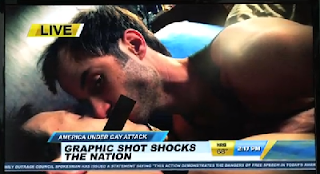 What makes Husbands unique isn't just its subject matter but the couple at its heart, a couple that just happens to be put under the spotlight because of the public space they occupy as an actor and athlete. Brad put it this way: “We were taking a couple that is in the public eye and starting there with these bigger issues and then moving backwards as to how that affects two people on an intimate level. I feel like most stories about this kind of content will start at a personal level and then go out to say how is this a bigger thing that affect us all. We wanted to go in. I like the concept of watching what happens to people when they go under the microscope. These two people that are real and emotional just like you and me have this global stage watching their behavior so how does this make them react? How do they respond to that?”

That is the central drama of Husbands and perhaps a preview of the real human drama that our nation will see in its near future. That is why it is so easy to say "I do" to this revolutionary web series. It only takes 40 minutes to get caught up for season three. If the past week is any indication, the world may already look a lot more like Husbands by the time you finish.

(you can find out more at http://www.husbandstheseries.com. Husbands the comic is published through Dark Horse and is available wherever comics are sold. Once upon a time airs Sundays on ABC )