This is not the kind of movie you bring home to mama. Unless of course, your mom is into blood, nudity, drug use, and just some really fucked up stuff all together. My mother would probably have a damn heart attack. Seriously guys, this movie is twisted. Lets put it this way...I went with a friend of mine and she ended up leaving because this movie actually bothered her. However, my friend doesn't care for a lot of gore. She called Headless "Torture Porn" and I called it "Fantastic!".
In Found we all got a little taste of Headless and some of the horror that came with it. That little taste was NOTHING compared to the full-length movie. The special FX, alone, were awesome. Not to mention the actors, the back story, and just everything was very well thought out and put together in a way that made you nervous just watching it. Goosebumps people! I had them the whole time.

You get to learn more about the killers background and how he turned out the way he did. I actually felt bad for him. He was treated poorly by his older sister and even his own mother. His mother blames him for his father running off and leaving her to take care of everything. I was shocked that she actually fed him at all. Even though the only meal you got to witness him eating was the head of a rabbit. His older sister (to me) treated him worse than his mother. She gets him in trouble, mocks him, and even pisses on him to quench his thirst. This torture continues even as they grow older. Don't worry though, they get what they deserve in the end. 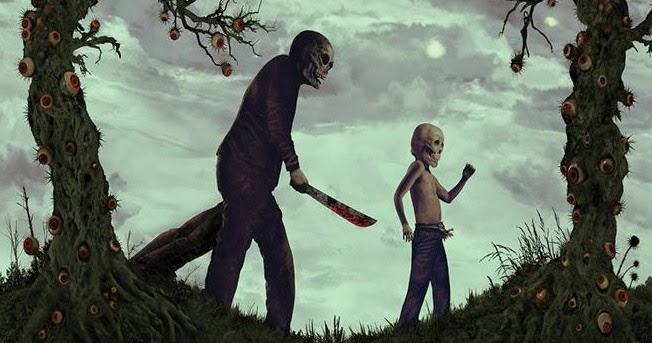 In all these years of torture and loneliness he develops Skull Boy who, to me, is the cutest damn character I have seen in a long time. Skull Boy is basically the devil on his shoulder. Constantly telling him what to do and who to kill next. He never speaks. He just makes this deliciously creepy clicking noise and points his little finger. The best scene in the entire movie (in my opinion) is after one of his many kills, he is dragging the body through this open field. Skull Boy is leading the way and he is just skipping so innocently that when I saw is, I couldn't help but smile. I can't really explain how adorably creepy this kid is. You would have to see it for yourself.
BUT....
If Skull Boy is the reason the killer is doing all this, then that is one fucked up little kid! I won't give away too much but some of the stuff this guy does to these people (not to mention their bodies after they have died) is seriously messed up. So if you're like me, and love watching messed up films, HEADLESS is a must see!
Headless Reviews The Horror Hive