Will The Latest TERMINATOR Live Up To The Hype? 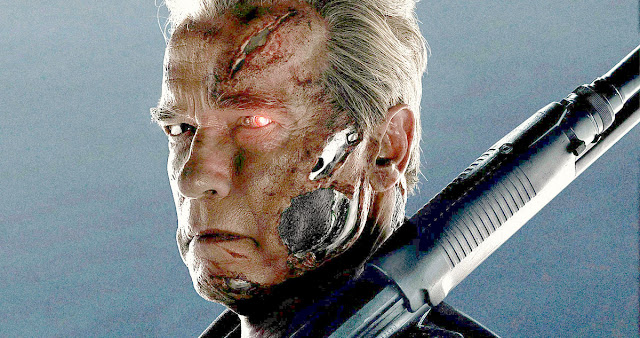 The Terminator franchise has spawned several incarnations in almost every media form. Everything from films and TV to video games and comics has a little piece of The Terminator to call its very own. While there have been a lot of ups and downs with the film franchise, the buzz and hype around the fifth movie installment TerminatorGenisys is going strong.

Genisys does not simply try to cash in on the Terminator's popularity but instead pays homage to the original films (perhapsa bit too heavily) while carving its own path. The newest film takes us back to 1984 and begins to rewrite Terminator history right off the bat. John Connor sends trusted friend Kyle Reese back to save his mother but finds that she has been raised and trained by another Terminator since age 9. Honestly, it would be tough to go into much more detail about the plot here, but suffice it to say that everything we know about the Terminator universe from the previous four films and the cult favorite TV series The Sarah Connor Chronicles (all of which are seeing heavy airtime thanks to reruns and on demand - try here and here for info), will be rewritten. Whether or not this was the treatment the franchise needed is something that’s widely up for debate.

Genisys manages to stay true to the roots of the series, even including some scene recreation from the original Terminator film. This is why James Cameron threwhis support behind this latest adventure, even though he has nothing to do with it. It stays respectful to the series while giving it a much-needed facelift. Arnold Schwarzenegger also felt attracted to this project because of the quality of the script and plot line.

Cameron and Schwarzenegger aside, the general word on the street about Genisys is not good. Fans are tearing images and film clips apart while reviewers are claiming it is too confusing and bland. With recent film franchise relaunches like JurassicWorld and the eagerly anticipated StarWars: The Force Awakens, the moviegoers' thirst for nostalgia seems to be strong. Unfortunately, it seems to end at The Terminator's front door.

There are several things working against Terminator Genisys. Some of these may only be rampant fan speculation, but the facts we already know don't lead us to be too hopeful. One of the biggest kicks in the head is the rumoreduse of comedy in this new film. Trailers have shown a little humor, and that has not gone over too well, but reports from those close to the production have come out as saying this may be the most comedy-heavy film of the series. This would not be the first time comedy made an appearance in a Terminator film, but it has never felt right in the series.

On the smaller end of the complaint scale, some fans are complaining that a certain Arnie body part will not be showing up in one of the most iconic scenes in film history. The Terminator gave us insight into Schwarzenegger's 'littleArnie' when he first appears from the future. When this scene was recreated for Genysis, it was abody-double and some CGI magic that brought it to life. To keep the PG-13 rating, it was decided to give the T-800 a Ken doll appearance.


JurassicWorld has been avery successful relaunch and Mad Max: Fury Road has become a fan hit. On the horizon, we are already drooling over StarWars: The Force Awakens and a new Ghostbusters film (or two). All of this can be a good sign for the success of Terminator: Genisys, but since there is almost no good buzz floating around from fans or critics, that does not seem to be a likely scenario. Who know, though? We have been surprised before.