Where Does ROGUE NATION Stand In The MISSION: IMPOSSIBLE Franchise? 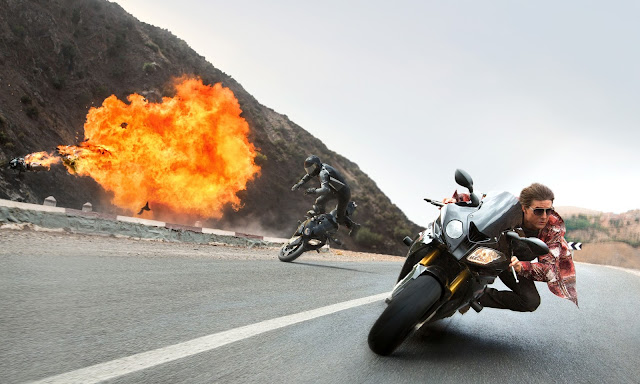 While not as iconic as the James Bond series or as lucrative as the Marvel franchise, the Tom Cruise-led Mission: Impossible films do generate steady interest among moviegoers. Cruise is Ethan Hunt, leader of a group of secret government agents known as the Impossible Missions Force (IMF). The team performs covert operations often involving lots of explosions, thrilling chases and countless encounters with bad guys trying to prevent them from succeeding. The only connection to the TV series is Jim Phelps (with Jon Voight replacing Peter Graves), who's killed off in the first movie. As with all movie franchises, individual films within the "MI" series rate higher than others, as evidenced by the following ranking of the five "Mission: Impossible" films from worst to best:

Director John Woo turns the second "MI" installment (available via Netflix) into a bunch of action scenes with something sorta resembling a plot thrown in between explosions and Cruise stunts. The storyline amounts to nothing more than the search for a deadly virus and some side plot where Ethan gets romantic with the bad guy's (Dougray Scott) ex-girlfriend (Thandie Newton). Entertainment Weekly referred to the movie as a "throwaway pleasure" in reference to great cinematography and action shots backed by an otherwise forgettable plot. Box Office: $546.3 million

The problem with the original "MI" film is the "everything but the kitchen sink" plot - one that's literally almost impossible to figure out from an initial viewing of the movie. It all starts with a mission in Prague that goes horribly wrong where everyone on the team is offered while on a mission to retrieve stolen files and dives into a series of subplots, conspiracies and hard-to-follow twists and turns ending with Phelps turning out to be a traitor. Richard Schickel of Time magazine summed up the major issue with the film (which you can stream instantly with Netflix and FiOS), observing that it fails to link a series of events "beyond surviving the crisis of the moment." Box Office: $457.7 million

Ethan is semi-retired as MI3 opens (available via Vudu). He soon goes rogue, however - which is when Hunt tends to be at his best as a character - while tracking an arms dealer (Philip Seymour Hoffman). Described by Entertainment Weekly as a "clever, booby-trapped thriller," the film dazzles with high-tech gadgets while offering a more satisfying plot. On a side note, Ethan finally clues his fiance/wife Julia (Michelle Monaghan) in on his secret life while appearing content to let his team (a very capable cast that includes Maggie Q and Jonathan Rhys Meyers) as he heads off on his honeymoon. Box Office: $397.9 million

Ghost Protocol (which you can rent through Amazon) offers a plot that seems like something out of a video game, further echoed by the film's stark cinematography and score. Breaking away from the previous movie, this "MI" sequel effectively refocuses the franchise with a compelling plot where the tables are turned on the IMF team as they take the blame for a Kremlin bombing that inspires a Russian nuclear specialist (Michael Nyqvist) to attempt to launch a nuclear war. Roger Ebert referred to it as a "terrific thriller" while also praising the plot. Box Office: $694.7 million

A group of rogue assassins serve as the enemy in Rogue Nation, where Hunt must not only stop them, but also prove that the secretive operatives really exist. Former "Bond" thug Jens Hulten turns in a stellar performance as another bad guy - this time as "the Bone Doctor," the head of the Syndicate. Things heats up as the IMF is absorbed into the CIA and Hunt becomes a man on the run. The ensuing action involves a knife fight in the streets of London and a creative payback in a tunnel filled with gas. Most critics found the over-the-top plot to be "preposterously enjoyable," as The Boston Globe put it in their review of the film. Box Office: $134.5 million (so far).

The Mission: Impossible franchise is one of those rare film series that has managed to fine-tune its style and storyline in subsequent movies beyond the original, essentially reinventing itself with Ghost Protocol and Rogue Nation without the need for a Hollywood re-boot. Whether or not MI will continue its renewed relevance with the recently announced Mission: Impossible 6 remains to be seen - although it's a safe bet to assume that this franchise isn't likely to self-destruct anytime soon.