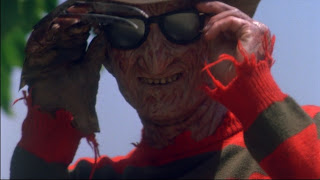 Breakdown
Following up the previous Nightmare film, the dream demon Freddy Krueger is resurrected from his apparent demise, and rapidly tracks down and kills all three of the surviving Elm Street kids. However, Kristen (who has the ability to draw others into her dreams) wills her special ability to her friend Alice before her demise. Afterwords, Alice soon realizes that Freddy is taking advantage of that unknown power she now wields to pull a new group of teenage children into his foul domain.

From David Thiel on IMDb

My thoughts
Robert Englund said it best.  NIGHTMARE 4 is the MTV edition of the NIGHTMARE series.  And I couldn't agree more.  A solid follow-up to DREAM WARRIORS, wouldn't you say?

A Nightmare on Elm Street 4: The Dream Master Freddy Krueger