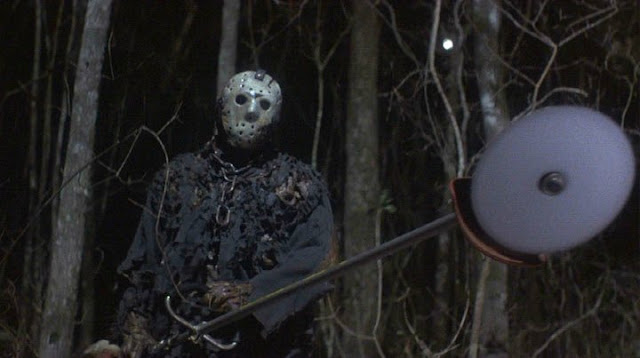 At the end of Part VI, where we last left Jason Voorhees, he was chained to the bottom of Crystal Lake.  But now, something has brought his back.  Today's sequel is 1988's FRIDAY THE 13TH PART VII: THE NEW BLOOD.

Breakdown:
Lying dormant at the bottom of Camp Crystal Lake, Jason Voorhees is released from his watery grave by a telekinetic girl. And so the killing begins again. Can she use her powers to stop Jason, or is he back for good?

From Michael Silva on IMDb

My thoughts:
THE NEW BLOOD will always hold a special place in my heart.  For the longest time, it was favorite in the franchise.  That has since changed, but I'll always remember the first time I saw Jason stand up out of the lake and his spine was exposed.  Classic!  Still a cool flick, but just doesn't do it for me anymore.