9/10/2009
The fine folks over at HorrorBid updated their site today with an interesting article where Derek Mears (Jason Voorhees in the Friday remake) addressed the rumors of Tim Sylvia replacing him...

I'm assuming most of you knew about the rumor floating around concerning Derek Mears not reprising his role as Jason Voorhees in the next installment of Friday the 13th (and if you didn't, what rock were you hiding under?). Yeah, yeah we already know it was debunked as a result of a mix up but now Mr. Mears has spoken and if there was ever any doubt this puts the nail in the coffin.


It's funny how one little sports reporter can mix up two slasher legends and the chaos ensues! How could he mix up Jason with Michael Myers? I mean it's not like they both wear white masks, or enjoy killing teenagers, or neither speak . . . hmmmmm. Anyways, (sorry guys I couldn't help it) one of Horrorbid's fellow myspace friends contacted Mr. Mears and asked him directly about this mix up.

Here is the conversation word for word:

Donnie: I saw your movie yesterday and LOVED IT!!!! Then, I just go off horrorbid.com where they say this MMA Fighter is playing Jason in the sequel to your movie. From the looks of things the guy needs to keep his head in winning his fights for once rather than playing a role in a movie. But this is only a rumor so far, so could you approve or deny this please?

Derek: The rumor is false. I am happy you digged the new film. Hope you have a great weekend-Derek

Donnie: Okay, so the guy I was talking about not doing Jason in this sequel. You doing the part then?

Derek: Being that the film hasn't been green lighted they can't offically offer any roles. I'd like to return, so cross your fingers.


So there you go, but wait a sec? Why was I under the assumption that Mears had already signed on for the sequel? According to Derek above he's not been offered the role yet (officially). So yes, the rumor about a former UFC Champ replacing him is false but Derek's return is still in limbo? Maybe I just made that up in my mind since Derek was a PHENOMENAL Jason and I couldn't imagine anybody else doing the part at this point. Suddenly I'm not feeling so snug about the sequel to the Friday '09 remake. Like Mr. Mears said above, lets cross our fingers he gets the part!

Once again I've got to ramble on about how great of a guy Derek Mears is. He always takes the time to talk to his fans and doesn't ignore them (which he easily could do). If you EVER have a chance to meet him do so, just gives you an added level of appreciation for what he's trying to do for one of our coveted Horror Slashers! Thanks to Donnie for the update! 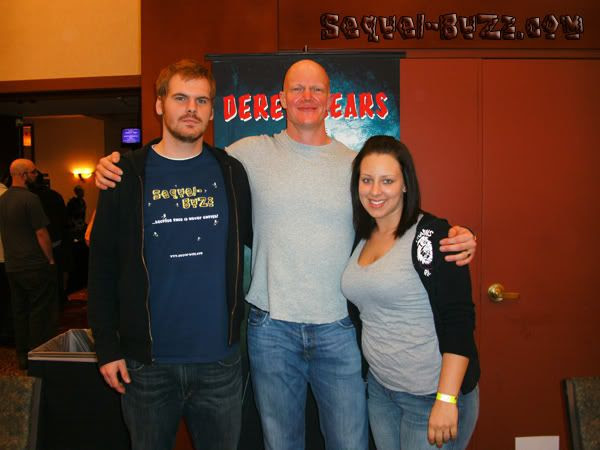