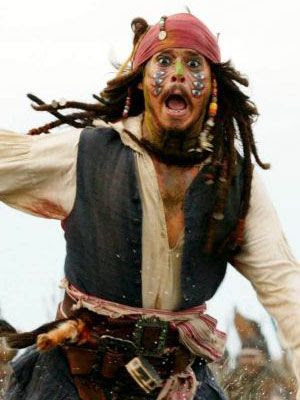 The fourth chapter in the Pirates of the Caribbean saga has officially been given a title...and a release date. The film will be given the subtitle of On Stranger Tides. Here's the story from E!...

The fourth film in his huge swashbuckling series will be called Pirates of the Caribbean: On Stranger Tides. And it'll storm theaters summer 2011.

This was a surprise appearance, of course, Depp's favorite kind, and made minutes after Kermit and Miss Piggy popped in to promote the new Cheapest Muppet Movie Ever Made (to be written by Jason Segel).

"I'm looking for a talking Frog," Depp mumbled to the crowd of 5,000 or so fans assembled for the expo. "I like frogs."

And then he sailed off.

The Pirates movies have grossed more than $1 billion in the United States alone.