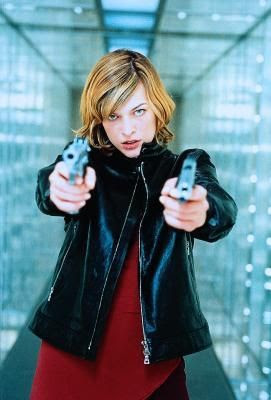 The fifth film in the Resident Evil series is set to be a semi-reboot. I guess it's a prequel, really. It'll tell the story of how the virus was created. Here's what B-D had to say...

While Sony Screen Gems is prepping for Resident Evil 4: Afterlife, the 3D sequel slated to arrive in theaters August 27, 2010, Bloody Disgusting has learned exclusively (and confirmed) that the studio is already looking forward to the fifth film. While Milla Jovovich is confirmed for Afterlife, it's got to be getting expensive and (increasingly) difficult to keep her onboard, even though she is married to producer Paul W.S. Anderson. Instead of moving forward with the ongoing story, the studio is planning a quasi-reboot, which is tentatively titled Resident Evil Begins. While it's a long, long, long way off, the idea is to redo the story of a special military unit who fights a powerful, out-of-control supercomputer and hundreds of scientists who have mutated into flesh-eating creatures after a laboratory accident. What do you guys think about a reboot only 8-9 years after the franchise began?