The TRUTH about Halloween 3D 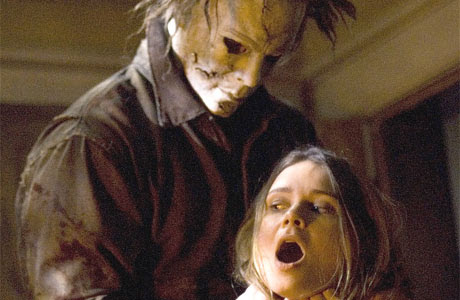 This bit of information comes from a VERY reliable source via Michael-Myers.net. Courtesy of thewholefknshow...

I just spent the entire evening discussing all things Halloween with my "guy in the know" and there are a few things you should know. First off, Harvey and Bob are originally from WNY. As is my friend who holds the high position that he does, they've spent many hours together over the years and that particular fact was something that even I never knew until this evening.

Here's the deal. Halloween 3D is a REAL possibility. But, there is some serious issues between all parties involved in this series. Infact, the power struggle is alot deeper than anyone ever thought it was. The way I hear it, Harv and Bobby have absolutely NO love for Halloween what-so-ever. And this is not an exaggeration I'm told. Harv and Bob are about the bottom line, especially now with the financial peril that they are currently in. The "gimmicky" side of H3D is what they're looking for to make the almighty dollar count rise.

H3D has been in developement for alot longer than you all thought. You see, H3D was to BE H2. The idea that they initially had for H2, was the concept that is NOW H3D. When I posted to you fine ladies and gents that the powers that be DID NOT want Zombie for H2, it was Malek who did, it was the truth. Harv and Bobby are not big fans of Zombie, they never really were. The way it was explained to me this evening is that the power struggle is YEARS old, going all the way back to Halloween 6/666 between the now defunct Touchstone Pictures (Disney owned/distributer of Halloween 6/666) and Trancas/Akkads.

Moustapha was shopping Halloween around after H8, Lionsgate were the front runners to get the rights etc. However, Harv and Bobby had a stake as well and the deal could never go down. The Akkads and the "Brothers Miramax" were not friends, it was a rocky relationship from the get go I was told and things were always a battle. From story, to writers and of course to directors and such. Harv and Bob have the money, Malek needs them, not the other way around. They weren't happy with Rob at all and the way this film went down, so they began prepping the H3D idea on their own.

What is known currently about H3D is this, Rob is NOT involved, Malek isn't happy, and the 'Inside' guys' storyline will have NOTHING to do with this new film. That script is dead in the water. I can't get into what I was told specifically, but I can say that the events of H2 are very muddy and you can expect alot of magic tricks to bring Michael back to life. Zombie's story literally was intending to kill Michael for good. And the only reason that Harv and Bobby allowed it to go that way is because they KNEW ahead of time that their new idea was in developement and Rob's ending would have ZERO bearing on what H3D would be all about.

Now of course there will be the odd kid/clown who will doubt what I'm saying right now. That's fine. I know who I know, and that guy is at the top of the heap in terms of what he knows and what he found out for me. He knows my love and my passion for this series.

And in closing, I saw the screener for H2 weeks back, some post prod had yet to be complete, music added etc. I took my Wife today as some of you might recall me mentioning last night. In her words she "...wanted to see the trainwreck for herself" She wasn't impressed to say the least, but then again, neither was the majority of the population. Having said that, some of what Rob shot was beautiful. Some of the visuals were stunning, well lit, and just all around great looking. It was the writing and the acting that really were beyond saving. Rob is not a writer, he's a visionary. His eye is wonderful, is writing is horrendous and is an amateur in that dept at best. Rob would've best suited to direct and NOTHING more, no casting influence, no nothing. Just direct better actors, based on someone elses script. When Rob gets carte blanche i.e. writing, producing and directing, it's a disaster area.

And there you have it. So my bet is that H3D will be yet another reboot. Oh well. There's no place to go but up, I guess. And this is Dimension's last shot at avoiding termination.