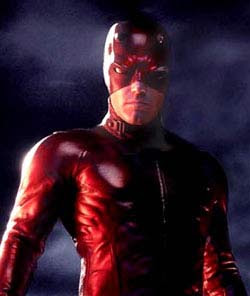 No surprise here, Daredevil is being relaunched. Even though I personally liked the original, this reboot may not be a bad idea. Here's what Moviehole had to say...

A few months back word got out that Fox was looking to reboot not only ''Fantastic Four'' (which the studio has since confirmed) but the just-as-recent ''Daredevil''. It may seem silly – and quite frankly, it is – to remake something so recent, but fact of the matter is, if Fox don’t do something with the properties the rights revert back to Marvel (now owned by Disney). That’s why you’re also seeing hurried movement on new ''X-Men'' movies.

Today, Mike Fleming confirmed the widely-circulated rumour that “Daredevil” is to be relaunched, suggesting the project has inched forward with the hiring of a writer. David Scarpa, writer of the dire “Day the Earth Stood Still”, is onboard the project. I understand Fox might want to keep it in the family, thus hiring someone who’s recently worked on a Fox tentpole to write “Daredevil Begins”, but surely there are better writers on Tom Rothman’s payroll?