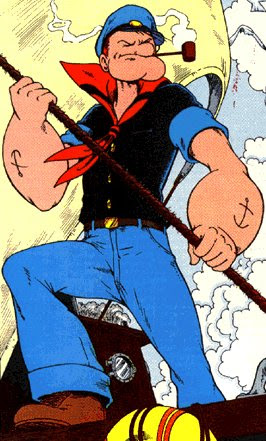 Sony is bringing an all-CGI "Popeye" to the bigscreen, with the iconic sailor man's muscles set to pop in 3D.

Avi Arad, who teamed with Sony to turn Spider-Man into a powerhouse franchise, is producing. Scribe Mike Jones is in negotiations to adapt.

King Features Syndicate, which is owned by Hearst Entertainment and Syndication, controls the property and decided to bring it to Arad, who worked for years with Hearst president and former Marvel topper Scott Sassa. Popeye hasn't been seen on the bigscreen since 1980 when Robin Williams starred in a live-action version helmed by Robert Altman.

"Scott called me and said, 'I have something for you,'" said Arad, who grew up watching Popeye shorts in movie houses in his native Israel. "I literally started singing the famous Popeye song (after securing the rights). What always blew me away is the level of the animation. It was so beautiful and unbelievably detailed."

Project was a natural fit for Sony, which is bringing a similar project to the bigscreen with "Smurfs." Sony Pictures Digital Prod. topper Bob Osher also has long-standing relationship with Sassa, the former NBC Entertainment topper.

Jones landed the writing gig based on his buzzed-about screenplay "The Minotaur Takes a Cigarette Break," which is in development at the Gotham Group.

"I'm an unabashed, lifelong Popeye fan," said Jones, who is a Variety alum. "Introducing this squinty-eyed sailor to a new generation also means reintroducing him to those who, like me, grew up with him."

The logline is being kept under wraps, but Popeye's love interest Olive Oyl, nemesis Bluto and adopted child Swee'Pea will be part of the adventure. Arad says the new version will cover the themes of friendship, love, greed and life, and focus on human strengths and human frailties.

"As one of the earliest animated characters ... Popeye has become one of the most enduring and iconic cartoon characters of all time and indelibly linked to the evolution of animation," said Hannah Minghella, president of production for Sony Pictures Animation.

The spinach-loving hero, who spawned the longest-running series of talking animated shorts, is considered a merchandising gold mine, with Popeye toys, books, puzzles and games. Studio says the character, whose likeness is used widely to hawk green veggies, is the world's No. 1 licensing character in food.

"While each generation has discovered him in different incarnations, the fans have continued to embrace him through the years, coming back time and again to that quintessential collection of character traits that has made Popeye beloved around the world," said T.R. "Rocky" Shepard III, president of King Features Syndicate.

Jones is repped by Gersh and Gotham Group.