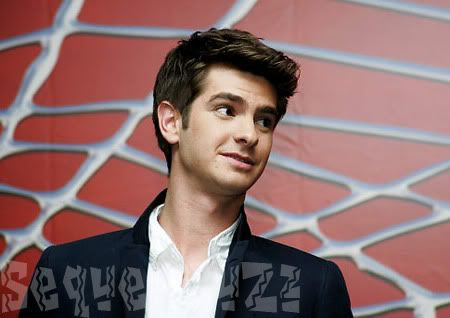 In a recent interview with The Guardian, Andrew Garfield dished a little bit on his experience playing Peter Parker in the much-anticipated Spider-Man reboot...

Andrew Garfield, retiring the suit for a few days whilst he downs eggnog with a drunk uncle, says in a new online interview that he’s been shooting “Spider-Man” (2012) for a couple of weeks now and is really enjoying certain aspects of it.

In an interview with The Guardian, the actor decides to mention not how great it’s been working with vets like Martin Sheen or Sally Field, nor how beautiful and talented co-star Emma Stone is, but how ‘comfy’ the “Spider-Man” getup is. As one would.

”I feel like a kid in my pajamas”, the 27-year-old star of “The Social Network” says.

“I can only say how it feels and it feels pretty special. It feels like a dream realized and a fantasy realized,” he added. “I don’t take it lightly and I feel incredibly lucky that I get to wear spandex for the next few months.”

Under those pajamas you won’t find a bulk of muscle. Pattinson says he didn’t go all Taylor Lautner for the part.

“I think Spider-Man needs strength, but Peter Parker is still a teenager, you know? That’s a very tender balance to figure out,” he said. “It’s very specific what we’re trying to achieve in terms of body type and the feeling of that. Rest assured, there’s a lot of people who are helping me with it because I have no discipline in that respect. My father’s a swimming coach and I kind of rebelled against that very, very early on so any form of physical discipline has to be really cracked with a really smart whip.”

Meanwhile, co-star Emma Stone says she’s signed for a couple of “Spider-Man” movies. This wouldn’t normally be news but considering Stone’s character Gwen Stacy was killed in the comics, and fairly early on, one might’ve assumed this might have been a one-off for the “Easy A” starlet.

Speaking to Jay Leno about her new blond locks (well, in fact, she’s naturally pineapple; red was just a diversion) the actress says ”There’s a few Spider-Men, so I may have to keep (my blonde hair) for a couple of years.”