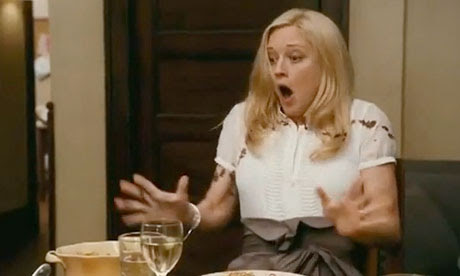 I found a neat little review for Little Fockers that tried to find the good in the movie, entertaining and a fun read...

For whatever reason, the third entry in any series of films is often the worst and sometimes not even watchable (remember "Spider-Man 3?"). "Little Fockers," which is the second sequel to 2000's "Meet the Parents," is a perfectly serviceable comedy that manages to sidestep the typical "threequel" curse.

Greg Focker (Ben Stiller) is now a cash-strapped dad enticed to moonlight as a speaker for a drug company by newcomer to the series Andi Garcia (Jessica Alba). The timing is awful, as his near-psychotic father-in-law, played with the now-customary hamminess by Robert De Niro, has now annointed Greg heir apparent as his successor as head of the family, and is going to be in town for the twins' birthday.

The twist this time around is that the parents and inlaws are on Greg's turf this time, although he derives little strategic advantage from it. Paul Weitz, who directed "American Pie," is no stranger to shock comedy, and delivers the low-brow belly laughs with sufficient regularity. Don't knock it. It's more than "How Do You Know" managed. The story manages to reunite almost major character from the earlier movies, although Dustin Hoffman, who initially refused to come back, seems shoehorned in and probably was. Owen Wilson, who also appears in the disastrous "How Do You Know," is back from the first film and should be pleased that at least one of his holiday releases seems likely to make money.

Getting more emphasis this time around is Greg's competence as a nurse. It's a good idea. The audience roots for this character, and wants to see him show his stuff. He gets the upper hand with his domineering father-in-law a couple of times and the audience will like that.

The photography, it bears noting, is suprisingly bad in a feature film that had to be expensive if only for the cast alone. Remi Adefarasin photographed "Elizabeth: The Golden Age" which looked much better than this. Of course a period drama probably has to. "Little Fockers" won't win any Oscars, but it doesn't have to. To get its job done it needs to get some laughs and that it accomplishes. Unlike "How Do You Know," this is a comedy where all the good jokes aren't in the trailer. It won't suffer any on home video, but fans of the first two movies in the series won't regret buying a ticket to this one, either.

Yes, they set up for another sequel.


Thanks to Jim Dixon of Capital District Movies Examiner.