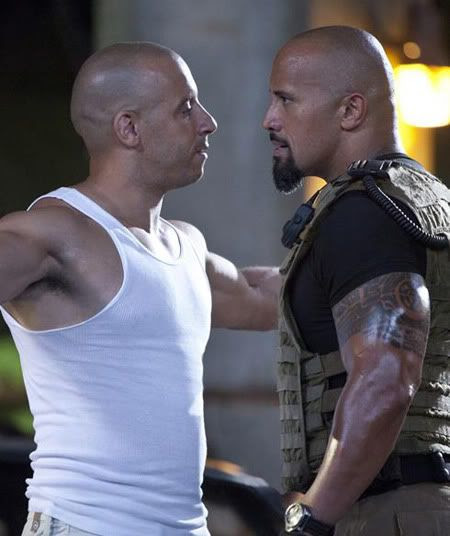 First still from Fast Five, the fifth installment in The Fast and the Furious franchise...

The first still from Uni’s “Fast Five” – featuring Dwayne Johnson, seemingly reprising the role played by Charlie Sheen in “Fixing the Shadow” – has hit the webbly wire. “Fast Five” is, of course, the fifth in the popular “Fast and the Furious” franchise.

Said photo features a staring contest between the stars of “The Tooth Fairy” and “The Pacifier”.

“One of the things I’ve always loved about the franchise — the reason I think it’s been so successful over the years — is that they never stop trying to up the action,” Johnson tells USA Today, who also have the image.

Director Justin Lin says, “If you’re going to do a Fast and Furious movie, you’ve got to go bigger each time,” says Lin. “People thought it would be impossible to get Dwayne. But he didn’t show up looking to cash a paycheck.” (No, he showed up looking for some taco’s. That’s just what I hear.)

“That’s pretty amazing, for a star like him to join the fifth part of a franchise”.

Johnson, playing a cop after Dom (Vin Diesel) and Brian (Paul Walker) in the film, “will wield the most with his Gurkha, a 10-ton armored military vehicle that looks like a Humvee on steroids”, says the paper.