Heather Morris is NOT 'Buffy'! 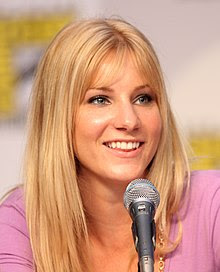 We previously reported that Glee star Heather Morris would be donning the stake in the Buffy, The Vampire Slayer reboot. Well, we were wrong...

A couple of days back the Sunnydale underground was abuzz that “Glee” scene-stealer Heather Morris (‘Britney’) had inherited the stake from Sarah Michelle Gellar in this worrisome “Buffy” reboot that Warner Bros is putting together sans the man that gave birth to the Slayer, Joss Whedon.

Easy rumour to believe – “Glee” is a hot show, anyone on it would likely be considered a viable commodity, and more so, in addition to having killer looks and great comedic timing, Ms Morris is an uber-flexible, super-healthy dancer. One would imagine that’s exactly what the producers are looking for in Buffy Sommers 3.0, no?

Kids, ‘script isn’t even written’ is a good thing; it’s sometimes code for ‘And who knows if the movie will even get made when it is’.