Zimmer Not Scoring 'Man of Steel' 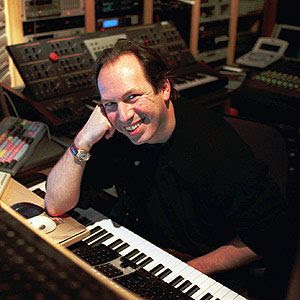 Contrary to the rumors a few days ago, Hans Zimmer will not be scoring the new Superman movie...

As expected with information on the Internet, it travels fast and can get miscontrued. Last week word spread faster than a speeding bullet that Hans Zimmer was going to be doing the music for the new Superman movie, being directed by Zack Snyder. ("Hans Zimmer to replace iconic Superman score,” said Entertainment Weekly.)

Part of the fuel comes from the fact that Christopher Nolan, for whom Zimmer did the music for Batman Begins, The Dark Knight and Inception, is producing the new movie.

He is expected to reteam with Nolan for The Dark Knight Rises, as the third movie is titled, but as for Superman, Zimmer says the rumours aren't true (at least not yet), and they have been allowed to bounce around the Internet because his long time publicist Ronni Chasen was murdered three weeks ago.

THR: The internet is buzzing with rumors that you’ve signed on to Zack Snyder’s Superman project. Any truth to that?

Hans Zimmer: You know, it’s like some dirty quote taken out of context. Let’s just be absolutely straight here: I have never in my life met Zack Snyder. I think I need to give him a ring. But here’s the thing: No Ronni [Chasen]. Suddenly all sorts of stuff starts flowing around with no warning.

THR: So if Ronni was still around this probably wouldn’t be happening?

Zimmer: No! Absolutely not! You know, I can’t even remember ever talking about Superman. It's a little bit, you know, it’s a little bit like "guilty by association" isn’t it?

THR: Because of Batman?

Zimmer: I met Chris Nolan once and he knows Zack Snyder and therefore I’m doing Superman. You know that’s all it is.

THR: It may stem from the fact a lot of people would like to see you take that project. Based on the Batman films.

Zimmer: How can I say it: My heart belongs to Batman. I wouldn’t even know how to go and give voice to it. I haven’t thought about it.

THR: Not to mention following in the footsteps of John Williams.

Zimmer: Right! John Williams, the greatest living composer -- full stop. And that happens to be one of his greatest themes. So no. And I’m not thinking of rewriting Beethoven’s ninth either. It just sounds like a thankless task, you know? So that’s unequivocally a no. I have never spoken with Zack Snyder.

Thanks to The Hollywood Reporter!