The 'Alien' Prequel Is Dead -- Sort Of 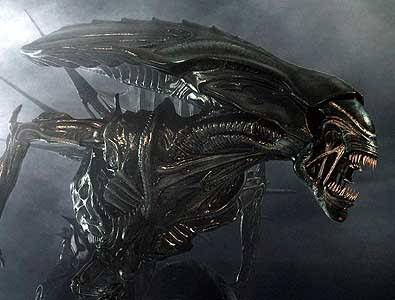 This really doesn't surprise me. With the failures of the Versus movies and Predator, it's no wonder why this is getting the axe too...well, sort of...

The “Alien” prequel is off. For good. As dead as Hicks and Newt at the start of “Alien 3″.

But the movie will be made. Let me explain, Fox and Ridley Scott have decided to rewrite the script for the long-proposed prequel to the 1979 hit to be a stand-alone film – titled “Prometheus”. No Space Jockey’s. No Bishop’s. Sort of like what happened with the “Commando” sequel, which ended up being retooled as “Die Hard”, and later, the “Total Recall” sequel – yeah, so basically any Arnold Schwarzenegger sequel – which would ultimately get up under the guise of “Minority Report”. Audacious move, hey?

Fox and Ridley Scott have been working on an “Alien” prequel for two years. It had been delayed a couple of times, has gone through numerous rewrites, and struggled to nail down a lead, but for better or worse it seemed as much a sure thing as anything in la la land.

Alas, Lindelof’s rewrite of the John Spaihts script triggered an idea in Scott.

“While Alien was indeed the jumping off point for this project, out of the creative process evolved a new, grand mythology and universe in which this original story takes place,” said Scott in a statement. “The keen fan will recognize strands of Alien’s DNA, so to speak, but the ideas tackled in this film are unique, large and provocative. I couldn’t be more pleased to have found the singular tale I’d been searching for, and finally return to this genre that’s so close to my heart.”

“In a world flooded with prequels, sequels and reboots,” stated Lindelof. “I was incredibly struck by just how original Ridley’s vision was for this movie. It’s daring, visceral and hopefully, the last thing anyone expects.”

Naoomi Rapace, who had been in talks for a while, is set to star.

Sounds good ‘n all, but I’m sure I’m not alone in my enthusiasm to still see another “Alien” movie. With Scott moving on, could James Cameron be arm-twisted into possibly doing a direct sequel to his “Aliens”? Yeah, probably not, but a webmaster can dream.

Thanks to Moviehole for the news.