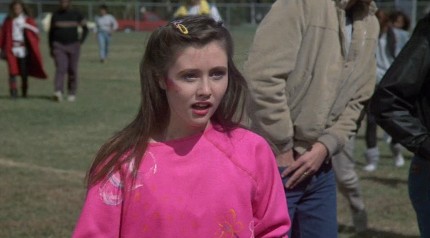 Even though it is widely known, and accepted, that a sequel to the 1989 movie Heathers is not going to happen, Shannen Doherty is still keen on voicing her opinion on the on-again/off-again idea...

Fans of the '80s movie "Heathers" were ecstatic over the 2009 announcement that a sequel to the movie about the original high school mean girls was in the works. But the flick's follow-up may have been killed, and star Shannen Doherty couldn't be happier.

"I'm weird about sequels to movies like 'Heathers,'" 39-year-old Doherty — who appeared alongside Winona Ryder and Christian Slater in the dark comedy — told CNN. "'Heathers' was a cult classic, and I think it should stay that and not be revamped or redone another way. It was amazing and amazing for that time period, and it can stay there. I'm very proud of that movie. It makes me nervous to see it messed with again.”

Ryder, however, is disappointed that the sequel talks have stalled.

"There was an idea, and I was sort of, like, on their back about like, 'We've gotta do it because, you know, Heathers exist outside of high school,'" Ryder, 39, told MTV. "There was this whole idea that [screenwriter] Dan [Waters], you know, came up with, with some little additions from me. At one point, I really wanted it to happen and was trying to get everyone riled up. But last I heard, who knows?"

According to Ryder, her co-stars seem unwilling to commit. "Everyone's doing their things right now," she said.


Thanks to The Marquee Blog for the news.