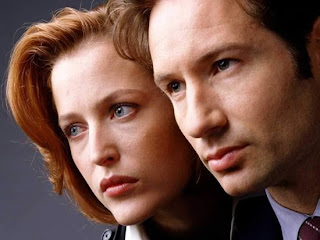 Say X-Files 3 and fans squeal. David Duchovny has brought foam to the mouths of those ravenous X-Files fanatics once again by bringing up the rumored 3rd part in the movie series. This time he's added that he'd prefer the next X-Files film to be a big blockbuster, so they can battle with their summer rivals. Should be interesting, if it ever gets off the ground!

“We worked together so hard for so long, so closely. We had some ups and downs personally, sure. But in the end, they are really like family to me. We’re all like this little X-Files family and I, for one, would love to continue. And I think there’s a lot left in the show. You know? And I think we can continue to make good movies.

“It’s just a matter of spending enough on a movie that can compete in the summertime. We made a movie and released it in the summer, but it wasn’t really a blockbuster movie. And it got kind of overshadowed by the bigger ones. So, we’re saying, make us big. We’ll fight with the big boys.”

David also went on, oddly, to talk about who he would "go gay" for.

“If I were gay, you know. I think Woody Allen is one of a long list of men I might go gay for,” said the star, who has two children with wife Tea Leoni.

“Garry Shandling is someone I’ve publicly gone gay for, for jokes. Oh and anyone in the Twilight movies. I don’t know any of their names, but all of them. The wolves, the vampires? They’re all fantastic.”

Really David? The Twilight guys? This gay does not approve. Woody Allen and Garry Shandling I could let slide, but Robert Pattinson? Oh well. Still looking forward to this blockbuster X-Files 3 that will hopefully make up for the last dud!

Thanks to ShowBizSpy for the David quotes.