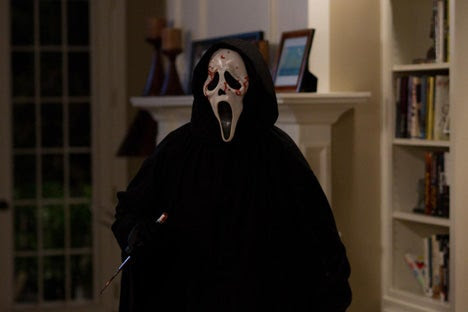 Okay, now I know I published my review for Scream 4 yesterday afternoon, but I had a chance to see the film again -- and I took it.

Now, in my completely unbiased opinion, Scream 4 is probably the greatest slasher sequel I have ever seen. It's smart, clever, hip, technologically savvy, funny, scary, and at times, just downright badass. Now that I have been privy to a second viewing, I can dive a little deeper into the plot and characters.

Let's start with Jill. Jill is Sidney's cousin who still lives in Woodsboro with her mother (who was Maureen's sister) and is a senior at Woodsboro High School. Jill possesses all the characteristics that Sidney had in the original (even the shady, sort of creepy ex-boyfriend). Jill is Sidney 2.0.

Moving along, we have Olivia. Olivia is, at times, too smart for her own good (ala Tatum). Olivia knows all the rules to horror movies, yet when the situation gets sticky, she's at a loss.

Now as for the Randy substitutes, I feel that S4 gave him not one or two, but three 2.0's. We have Robby and Charlie, who run Cinema Club at WHS, and Kirby, a fun-loving girl who happens to enjoy slasher movies, especially the "Stab" films.

And, of course, we have our main trio: Sidney, Gale, and Dewey. The same old lovable characters I grew up with. Oh, and I hinted at Jill's creepy ex earlier -- and I really didn't give him a short bio because it's kind of pointless...let's say he's Billy 2.0...sort of.

Though this may be a sequel, it is definitely a reboot at heart. Notice I didn't say remake there. It is simply rebooting the franchise. And it succeeds in every way. But when it comes to actually grading and critiquing this movie, it is nearly impossible, because most of the movies "flaws" and "bad dialogue" may very well have been done of purpose. This movie is so self-aware that it is almost beyond comprehension.

The in-jokes and style of this movie is a definite game-changer, just like the original. Horror has changes a lot in the past decade, and S4 takes notice. And as for our main trio, let's just say no one gets out of this mess without a few battle scars.

The writing of Kevin Williamson is the sharpest it's ever been. Now, does the film leave the door open for a sequel? Not really, but like I stated in my official review, neither did the original. I can only hope that Williamson mends his wounds with The Weinsteins...as I, for one, would love to see a 5 and 6 -- especially considering one of the characters in the film may still have a bone to pick with Ms. Prescott.

For once, a slasher sequel that made us laugh...and made us scream.
Reviews Sequel News