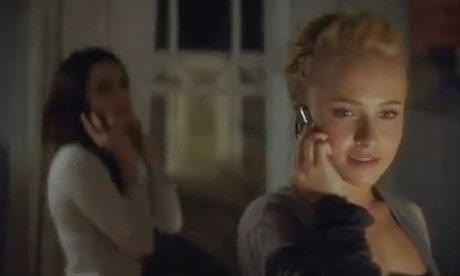 February 4, 2000. That was the night I watched Scream 3 for the first time in the theater with a friend of mine. I remember leaving the theater and feeling a little confused. The film I had just witnessed didn't really feel like a Scream film at all. In all honesty, it felt like a Scooby-Doo Meets Scream parody of itself, which really, is not the kind of "third act finale" that I was expecting.

Cut to April 14, 2011. This was the night that I watched Scream 4 for the first time. I left the theater thinking many thoughts, but this was the most prominent: Now, this is what Scream 3 should have been! -- a return to Woodsboro. Although Scream 2's college setting was fun, to successfully close a trilogy, one would think the third should take place in the same setting as the first (for the record, though, S3 sort of did).

Anyway, back to S4. It's been 11 years since the Ghostface killer has attacked. All seems right in the sleepy town of Woodsboro. Sidney Prescott (Neve Campbell) is on the last stop of her book tour, respectively in her home town. Deputy Dewey (David Arquette) is now Sheriff Dewey Riley. And Gale Weathers (Courteney Cox) is now...well...Gale Riley. Basically, Sid returns to town on the same day as the anniversary of the first Scream. Needless to say, as one character mentions, she is the Angel of Death. Wherever she goes, so does death and Ghostface.

So, it is a new decade, so there must be new rules. Correct? Oh, yes. The false openings were a breath of fresh air, though they may have dragged just a bit -- but that's beside the point. S4 is a lot more self-referential than the first. But my favorite aspect of this movie? I'd say it's the blatant rip on the horror remake/reboot trend that has swept Hollywood. This film proves that you don't need to necessarily remake a film to breath new life into the franchise. It shows us that all is needed is a fresh take on things.

Though the film has its flaws, mainly dialogue related, I'd definitely rate this film number two in the franchise, behind the original, of course. The film almost seems that if you were to take Scream and Scream 2 and roll them into one film, the result would be Scream 4. Don't get me wrong, this is not a bad thing.

A few things the film lacked would be the absence of "Red Right Hand", a song by Nick Cave which is used throughout the trilogy and the editing of Patrick Lussier. Other than that, the film is pretty much on par with the original, although this one does have a few disposable characters. There are many great homages and references to the original film, which I found very nostalgic and humbling. I do plan on seeing the film a second time, to give it a proper critique. But, like I said, despite its flaws, the film is pretty solid and the cast doesn't miss a beat. There is some decent character development and a few kill scenes in which I literally said to myself, "Damn, would've like to seen that character in the sequel."

Now it was rumored that there were plans for a second trilogy, but honestly, this film closes things up pretty solidly. But, then again, so did the first movie. I do think it's time for Sidney to take a back seat and let someone else be the target. There are many directions this franchise could go in, and quite frankly...bring it on! The film is a bloodbath of laughs and cries, leaving us screaming for more!

Again, I plan to see the film again, and when that happens, I'll elaborate a little further. Make no mistake about, the slasher genre has just been reinvented...again.