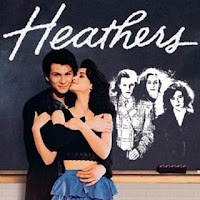 Over the years there has been many rumors and news articles surrounding a potential sequel to 1988's Heathers, starring Winona Ryder, Christian Slater and Shannon Doherty.  The original told the story of a girl who half-heartedly tries to be part of the "in crowd" of her school and meets a rebel who teaches her a more devious way to play social politics.

Although a true feature film sequel never did come to fruition, it seems that the idea of a sequel will live on in the form of a television series.


From Sony Pictures Television and writer and executive producer Mark Rizzo (The Man Date, Zip), executive producer Jenny Bicks (The Big C, Men In Trees) and Tom Rosenberg and Gary Lucchesi serving as executive producers for Lakeshore Entertainment.
Present day update of the cult classic 1980's film that picks up 20 years later with Veronica (played by Winona Ryder in the film) moving back to Sherwood with her teenage daughter, who enters high school to deal with the next generation of mean girls, the "Ashley's," daughters of the surviving "Heathers."

Thoughts?  Personally, I don't see how this can be spread out into a series format, but who knows.  Of course, all the youngin's will this it's a rip of Mean Girls (which was actually a rip of Heathers).
Film 2 TV Sequel News