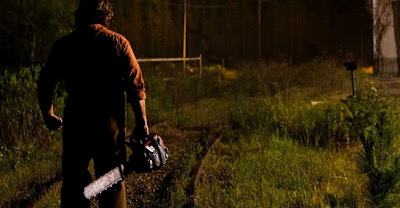 Well, I was late posting the teaser poster for Texas Chainsaw 3D, but we won't be tardy with this one -- the official teaser trailer for the film has hit the net.  Check it out below.  This new film, a direct sequel to Tobe Hooper's 1974 cult classic, tells the story of a young woman who inherits an old Victorian house in the backwoods of Texas from her grandmother.  Upon arriving at the location she seen discovers that she is related to the twisted Sawyer family.

Judging from the trailer, the film looks to try to get back to the roots of the original '74 flick.  In fact, it's almost as if this is the true remake we've wanted, just in a more subtle sequel/reboot sort of way (which is what Halloween: H20 should have been).  But, at the end of the day, I'm super stoked and a bit giddy to check out this latest Massacre.
Reboot News Sequel News