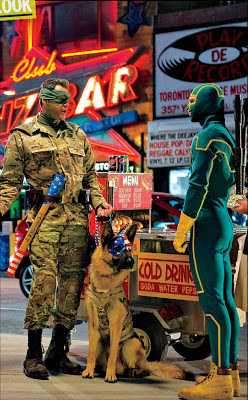 The first official image from Kick-Ass 2 has been released via Entertainment Weekly (scanned by Comic Book Movie).


In the action-comedy sequel Kick-Ass 2 (out June 28), the eponymous hero (Aaron Taylor-Johnson, right) joins a superhero team called Justice Forever, led by Colonel Stars and Stripes (Jim Carrey, left). Chloe Grace Moretz reprises her role as Mindy, but has "given up Hit Girl and is trying to be a normal teenage," says Jeff Wadlow, who picks up the directing reigns from Matthew Vaughn.