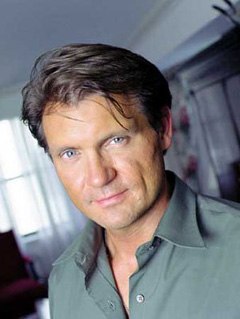 I got to give credit where credit is due here.  A HUGE debt of gratitude goes out to our good buddy John over at Scream-Trilogy.Net for digging up this story and connecting the dots.

Scream creator and screenwriter alum Kevin Williamson has a new show premiering soon called The Following.  Why's this relevant, you ask?  Here's the plot of the show:


The FBI estimates there are currently over 300 active serial killers in the United States. What would happen if these killers had a way of communicating and connecting with each other? What if they were able to work together and form alliances across the country? What if one brilliant psychotic serial killer was able to bring them all together and activate a following?

It's relevant because this was loosely the same idea Williamson originally had for Scream 5, had Scream 4 not have been butchered so badly (I still liked S4).  Which, in turn, was also his original idea for Scream 3 before Ehren Kruger came along to write the script.


Kevin Williamson’s Columbine-jettisoned ideas for Scream 3 broke the mold of previous films. Instead of one killers or two killers, or even one-upping into a trio of killers, the plan was to have the whole group of new teen characters carry the Ghostface legacy, masterminded by a still-alive Stu in jail. Sadly we got Scott Foley as a deranged spoiled Hollywood brat instead.

The writer rarely dismisses great unused ideas, instead he transplants them (for example, the suspenseful crashed car sequence in Scream 2 was originally written for I Know What You Did Last Summer). His original Scream 4 opening scene idea hinted at a chain of killers, which was again scuttled, but a seed was planted. Even the close-to-shooting script contained evidence toward the idea, with the murderous Jill surviving as a national hero with a not-quite-dead Sidney set to out her in the cliffhanger. Although he hasn’t come out and said it, it’s no stretch to see where this was going in Scream 5 – Jill in jail, controlling or inspiring a group of apprentice Ghostfaces.

So, at the end of the day, Williamson will see his visions come to fruition -- albeit in a TV show and not a Scream movie.  Nevertheless, good for you, Kevin!


Once again, thanks John for the great info!

What are your thoughts on this revelation?