'Terminator 5' To Be Written By Patrick Lussier And Laeta Kalogridis 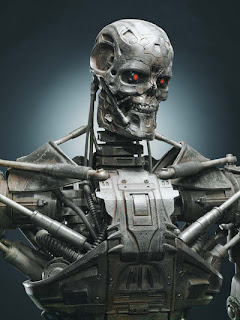 The next installment of the Terminator franchise, Terminator 5, will be scripted by none other than horror genre fave Patrick Lussier -- and Laeta Kalogridis.  Lussier, of course, is well known for directing My Bloody Valentine 3D, editing the Scream trilogy, writing and directing Drive Angry, as well as directing all the 2000-era Dracula movies -- quite an extensive genre resume, really.

And as for Kalogridis, she's best known for being the executive producer on Shutter Island and Avatar, as well as various uncredited behind-the-camera roles on a long list of films.

The two have worked together in the past, so I'm not too worried about their writing chemistry.  In fact, I'm a little excited about it -- I have no doubt the two will produce a screenplay that is more than worthy of going before the lenses, as well as restoring the series to its roots, which drifted a little in Terminator 3: Rise of the Machines  and a lot in Terminator: Salvation.

Needless to say, the scripting duties are in good hands!


Skydance Productions and Annapurna Pictures have set Laeta Kalogridis and Patrick Lussier to script the next installment of The Terminator franchise.