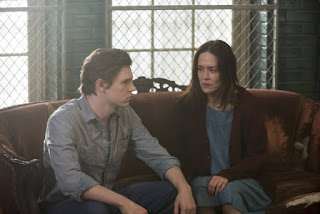 It was revealed by series co-creator and executive producer Ryan Murphy that stars Evan Peters and Sarah Paulson will return in third season of FX's smash hit American Horror Story.  The two will be reunited with the show's biggest star, Jessica Lange, for the yet un-subtitled third season.

Murphy also revealed a little about the premise of the new season: a romance set is modern day.  I'm okay with the bringing the series back to modern times, but I must add that it did a nice job in season two as a period piece mixed with modern elements.

Nevertheless, a third season is welcomed with open arms.


American Horror Story co-creator/executive producer Ryan Murphy lifted the veil a bit on the upcoming third installment of the FX horror series. At a screening of the season finale tonight, he confirmed that the storyline in season three will be a romance set in modern times, and that Sarah Paulson and Evan Peters will join star Jessica Lange on the next cycle. All three appeared both in American Horror: Asylum, whose finale airs next Wednesday, and the original American Horror Story.