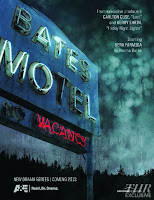 This is a little late, but the teaser trailer for A&E's prequel series Bates Motel, based on the classic Hitchcock movie Psycho and completely unrelated to the 1987 TV movie of the same name, has premiered (actually, it was released mid-December).

The series will focus on the upbringing of Norman Bates, played by Freddie Highmore, and his relationship with his mother, played by Vera Farmiga.  It does sound a lot like Psycho IV: The Beginning, but oh well -- looks interesting, nonetheless.  Now, if this season is a total bust, I expect the finale would most likely culminate with Norman killing his mother.  However, if this show is successful, I'd expect that climax to come either at the end of the show's run, or a mid-series shocker.