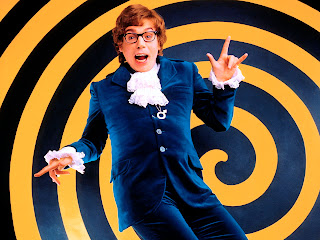 Last we heard anything new on a proposed Austin Powers 4 was way back in 2011, where Mike Myers, himself, decided it was time to return to the franchise.

But where does this sequel stand now?  It's been 2 years since we've heard anything.  But according to IMDb (so reliable, right?), the page for Austin Powers 4 was last updated on April 5, 2013.  Does this mean there are still rumblings regarding AP4?  Let's hope so.

While some loved Austin Powers in Goldmember, I, myself, found it to be the weakest entry in the franchise by far (my absolute favorite being part 2, Austin Powers: The Spy Who Shagged Me).

But as for a part 4, where should the series go?  This is a question I keep asking myself.  And honestly, maybe it doesn't need to go anywhere.  Perhaps it would just be another unnecessary sequel.  But on the other hand, despite The Love Guru, I have a lot of faith in Mike Myers -- so hopefully he can (and will) deliver us something worth while.